As promised, here we are in Buenos Aires, starting a new Antarctic season. For those not familiar with the comings and goings of our ship, MS Fram, you may think it strange that we start here. Well, it really isn't. Fram has spent the last weeks crossing the immense Atlantic Ocean, starting in Bergen on 7 October and reaching Buenos Aires just today, a little over 3 weeks later. Now we are positioned well to sail for our first destination of the Falkland Islands which are about 1700 km to the south.


Buenos Aires is a gigantic city. With it's surrounding metropolitan area, it is one of the biggest in the world with about 16 million people living within it's boundaries. Of course it's famous for tango, Evita Perón, football (24 professional teams play within the city limits!) and is the birthplace of the current Pope Francis!


Buenos Aires is a very popular tourist destination. Many of us had a chance to see parts of the city before we boarded the Fram, which was docked alongside in the main port area. It was great to see so many school children enjoying various parts of the city. 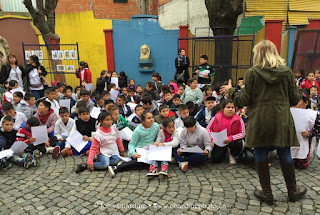 There is quite a of things to accomplish on sailing day. Fram arrived in the harbour about 7:30am and immediately started provisioning of food and other goods for the upcoming season. We also needed to "bunker" which is the nautical term for filling up with fuel. The long Atlantic crossing depleted supplies. By 10:30am our first passengers started arriving and we were all on board by about 3:30pm. What a relief to be on board! It is such a great feeling! Soon after we had our mandatory safety drill before sailing about 4:00pm, right on time! Two Argentinean pilots took us out of the harbour and into the famous Rio de la Plata.

The Rio (river in English) is really an estuary separating Argentina to the south from Uruguay to the north. We will be sailing in the Rio overnight and will enter the South Atlantic tomorrow morning, before turning south to our destination of the Falkland Islands. We are all looking forward to some beautiful days at sea before we get there. By the way, while at sea, we often combine two days in a single blog.

So, sit back, relax and enjoy the ride over the next few months!