It is not often this early in the Antarctic summer season that you are able to navigate through the Lemaire Channel, then farther south to Petermann Island. The winter sea ice is usually heavy and the Lemaire is often blocked with smaller icebergs. Despite the dire warnings of heavy sea ice this Antarctic season, we found almost none and we could easily reach Petermann Island in the morning.

In a fresh breeze we landed on a snow bank to the right of our normal landing in Port Circumcision, and then explored the amazing island. At first the light was grey and flat but then the sun came out and made for wonderful views of the mainland on the other side of the Penola Strait. 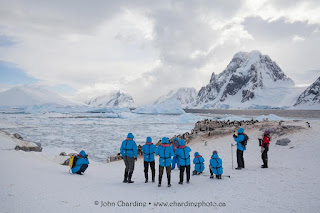 Mount Scott stood proudly as a backdrop to Petermann. In the foreground are penguins, but therein lies a story. Twenty years ago the common species on Petermann was the Adelie but over the intervening period, they have declined and Gentoos have increased. It appears that there is little direct competition between the two, rather, the trends are related to differing reactions to climate change. The Antarctic Peninsula has warmed more than any place on Earth over the last 50 years and this has meant less sea ice. Since krill rely on sea ice as a grazing habitat, they have declined on the peninsula. Adelies are krill specialists and have suffered with lower breeding success and insufficient recruitment to replace natural mortality in the adults. Thus the colony at Petermann has declined. Gentoos on the other hand can tolerate warmer conditions and are more flexible in the feeding habits. Their breeding success has been good and recruitment high. Their populations have been increasing on the peninsula and their distribution is moving south. Petermann is the most southerly breeding station for Gentoos in Antarctica so far but they are marching south!


A constant feature of our landing was the Gentoo Penguins returning from a feeding trip in large flocks. Then walking up onto the island and to their breeding locations. Why are the white penguins walking towards us, and the black ones walking away?!!!! 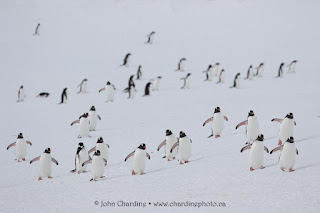 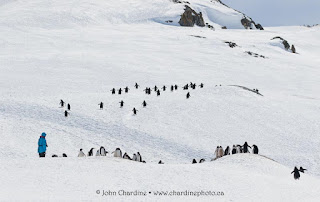 So this was our last landing in Antarctica and we are now headed across the Drake Passage to Ushuaia and then home. But we still have a couple of days to see more wildlife before we go ashore!

Email ThisBlogThis!Share to TwitterShare to FacebookShare to Pinterest
Photograph(s) by: Johannes C Apon, John Chardine
Newer Post Older Post Home
Welcome to MV FRAM's Expedition Blog!
MV FRAM is the most modern expedition cruise vessel belonging to the Hurtigruten fleet, roaming polar waters and taking people to remote places where only few go. In order to give you the chance to travel with us, even if only on your computer screen, we have created this blog. Here you can see what we have seen and read what we have done.
And, maybe you will be onboard with us one day!
All About MV FRAM - here
FOLLOW US ON FACEBOOK !