MV FRAM continued to snug along the Western coast line towards the southern most sound (Hornsund) of this artic archipelago. Today we finally encountered the weather change that was predicted for the previous days. On arrival into the Hornsund we were welcomed by low hanging clouds shrouding the mighty Hornsundtind (1431 m). 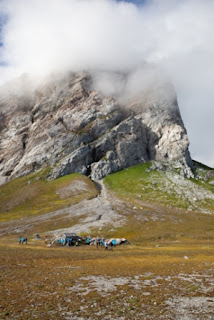 However, we received a treat by Mother natur:
while landing at Gnålodden the mist covered mountains suddenly lost their veil invoking in us a sincere feeling of awe.
Exploring the easterly expanse of this spectacular scenery, we were able to come at a close hold of a 5km long glacier front at the end of Samarinfjorden. Our geologist on board could inform us about the intricacies of structural elements and movement of glaciers.
The satellite station of the infamous female trapper from Tromsø, Wanny Woldstad, told its story of well-proven hunting activities. One of her eccentric hunting methods included a remote-controlled bell-system of small glass-bottles connected through a rope equipped with a bait of blubber. Repeatedly, the polar bears came and went for the bait. This alarmed Wanny, who shot the polar bears through a hole of the cabin’s wall. 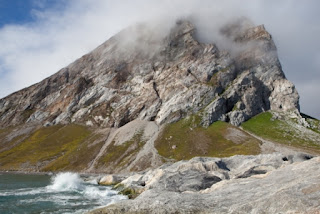 The place name Gnålodden refers to the bird’s unnerving sounds originating from thousands of nests in the bird cliff (Gnålberget). Interestingly, we could witness the awkward flight- paths of young Guillemot chicks. They were introduced through their accompanying parents to their rather accelerated adolescence by plunging several hundreds meters into uncertainty. It is well known that polar foxes and glaucous gulls take advantage of these first flight experiences. However, today we saw only safe landings.