When we visit foreign countries we naturally make comparisons with home. In Greenland there is enough in common with North America or various parts of Europe that we can move about comfortably, but that commonality is often superficial and it is the differences, the things outside of our lexicon of experience, that make visiting a new destination like Greenland so rewarding. 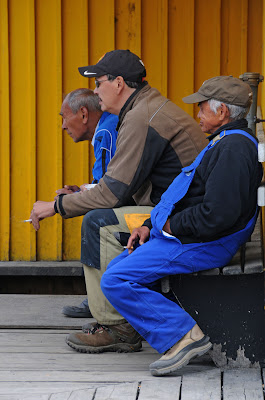 For example Sisimiut is the second largest city in Greenland with a population of approx. 5500 people. In both North America and Europe that would qualify as a small town. Here Sisimiut is a big city. The total population of this very large country is 55,000. Back home the entire population would make a small city.

The people here drive the same models of cars and trucks as we do at home, however the roads are a convenience within the towns. No two towns are connected by roads. Longer distance travel is by boat, or air, or snowmobile, or dog team. There are modern supermarkets, just like the ones at home but the freezers also have muktuk, caribou, muskox, whale meat and other local delicacies. You can buy a rifle, ammunition and all manner of fishing and hunting supplies along with a loaf of bread and a quart of milk. 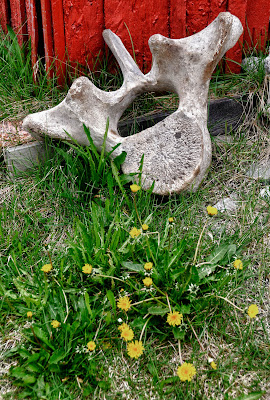 The children go to modern schools, just like back home. The curriculum is very similar but in Greenland the boys can go out and hunt with their own rifle at the age of twelve. Most people hunt and fish or have someone in the family that supplies the larder with game.


During the peak of summer a day never ends as the sun never sets. In the winter one has to wait a very long time for dawn.
Walk a couple hundred metres outside of town and you hear nothing but the wind carrying the song of a Snow Bunting. No sirens. No car alarms. No traffic noise. 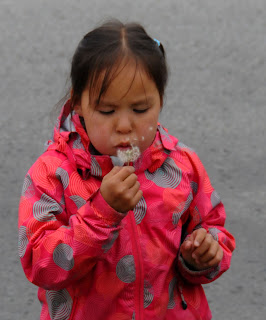 We have many things in common with Greenland and those familiar things are comforting and pleasurable to find, but it is the differences that make Greenland so special.
Overall the people seem more friendly. They are quicker to wave, or to say hello to a stranger. Try saying “hello” to a stranger at home. 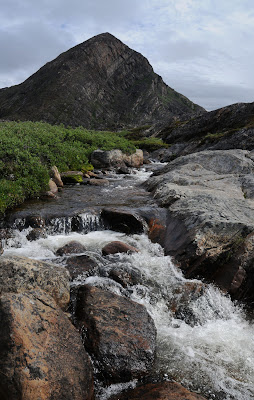 We arrived in Sisimiut just before 11:00. The sky was overcast. The temperature was a comfortable 10˚C with very little wind. These were ideal conditions for the long and difficult hike up Palaasip Qaqqa mountain. This morning 30 people set off on the hike and 27 made it all the way to the top! The hike has a high degree of difficulty. Every time we offer the hike there are a few people that find they have bitten off more than they can chew. 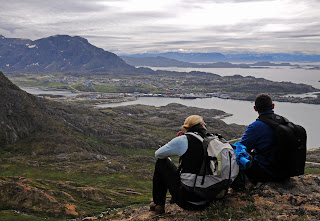 We also offered optional boat excursions to the abandoned village of Assaqutaq and a hike “back in time” to Tele Island.

As always, there was plenty to do and see in Sisimiut.

Email ThisBlogThis!Share to TwitterShare to FacebookShare to Pinterest
Photograph(s) by: Photos © Mark McDermott
Newer Post Older Post Home
Welcome to MV FRAM's Expedition Blog!
MV FRAM is the most modern expedition cruise vessel belonging to the Hurtigruten fleet, roaming polar waters and taking people to remote places where only few go. In order to give you the chance to travel with us, even if only on your computer screen, we have created this blog. Here you can see what we have seen and read what we have done.
And, maybe you will be onboard with us one day!
All About MV FRAM - here
FOLLOW US ON FACEBOOK !