Breaking through the ice with Fram

We arrived at Alkefellet in the early morning. It is classified as a medium size bird cliff in Svalbard and it is estimated that about 60 thousand breeding pairs of Guillemots breeds at this place.  However large numbers of Kitiwakes and Glaucous gulls breed at Alkefellet as well.  It is an impressive and amazing sight to see the movements and to hear the sound produced by the high traffic of birds in and out of the colony.  You might think as to be in the middle of a large bee swarm the sensation is spectacular an experience that you will remember for a long while.

We then visited Torellneset the place was cold and foggy, however we did manage to land and to see a large herd of about 68 walruses, although they were divided in two clusters, the second cluster was a bit out of view and a few more were in the water the total count was perhaps close to 100 animals.  Everyone manage and see a quite close view of these amazing creatures.

We returned back to Fram and continued through the Hinlopenstretet where we encounter the ice and navigated through it the rest of the afternoon a special feeling and sight. As we crossed the ice belt we spotted some polar bears we literally parked the vessel on the ice to observe them. They were quite curious but after a while they turned away and continued their walk through the ice. as the day ended we crossed the ice and again we ended in open waters to continue our trip. 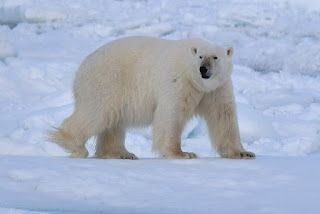