Our morning arrival in Narsaq was under low clouds but they promptly burned off during our stay and we had a very sunny and pleasant time at the museum, shopping both in the stores and by conversing with the local artisans who displayed their bead-work and other items at several locations along the roadside. There are several varieties of precious gem-stones that are found nearby and these are made into unique pendants and ear rings. 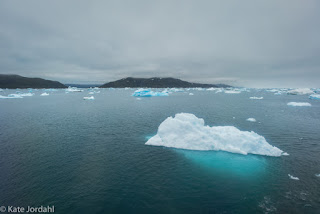 This is a town with a strong artistic community surrounded by waters rich in fish and land that enables prosperous sheep farms. In this town there is also new construction and the houses are brightly painted. All this gives the impression of a town that is upward bound and not like a few towns we have seen earlier, where the populations are declining as the people move to Nuuk. 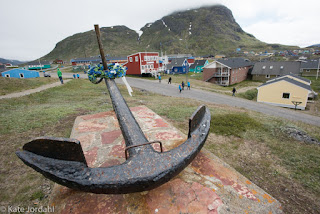 Qassiarsuk was our afternoon visit. The skies were clear and sunny and we had our choice of boat trips to the ice clogged Qooqqut fjord or hikes or just walking through the settlement. Again no matter which level of activity one decided on it was a very pleasant day.

The settlement is a very large sheep farm, it is clear as we walked by that there is much money invested in large tractors and irrigation equipment. Again the word prosperous comes to mind. This site was known as Eric’s fjord when it was settled by Eric the Red in the late 900’s. The climate was warmer then and subsistence farming had sheep, cows and goats, in addition to hunting and fishing. By the year 1000 Christianity had been introduced and the first church in North America was constructed. This site is across from the present church was clearly worth the visit. There are 2 wonderful reconstructions nearby, one to resemble the first church and the second is a replica of a turn walled Viking long house. This example is particularity informative as the interior contains replica clothing and utensils. 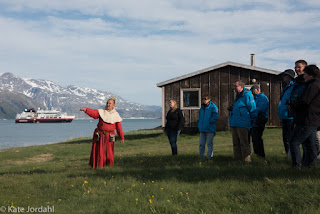 Back on the FRAM our evening closed with our Greenlandic staff members: Aka, Malena and Michael giving us an overview of the legends, games, songs and dances handed down and treasured by the Greenlandic people. 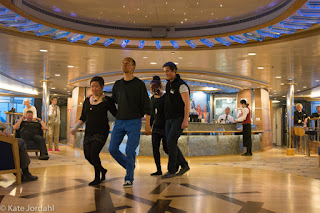