The Fjord of Hardanger is enormous, nearly 180 kilometers long, a maze of dramatically steep valleys, reaching deep into the landscape of western Norway.

Literally at its very end, at the finest tip of this wonder world we awake with the golden light of the morning sun, as it starts to caress the snow-capped mountains.
This morning mood is so beautiful, so romantic - so Grieg! How can it be easier to get out of bed…?
The day’s activities start with the Eidfjord community walk, guided by Katja, Arne and Olav, a powerful trio if it comes to history, culture, and everyday’s life in Norway. 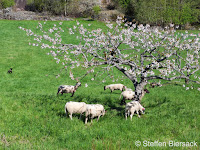 However, last time I gave here to the esteemed follower a short account on the presence of the Vikings and their graves, a mean wife being punished to donate a church and the blessings of owning a waterfall.
So, in order not to be too repetitive let me please focus on a different subject, evidently tightly connected to Norway’s past. Let’s talk about a few traditions.
As we are standing next to the church, I discover an open door to a tiny workshop. Inside I am confronted with the most beautiful violins - excuse me, fiddles - I have seen, carefully kept in a glass shrine.
The owner is not overly keen at first to have pictures taken, but after a brief explanation of our motives he happily agrees.

A very special instrument it is, first mentioned in the middle of the 17th century. And take a closer look: Contrarily to the normal violin there are two sets of strings: the normal ones and very thin ones who serve only the purpose of resonance, giving the instrument an unmistakable, pastoral sound.
There is a old connection between wedding ceremonies, a rowing boat and a man with the salute rifle, preserved for all times in the famous painting “brureferde” by Tidemand and Gude. A wedding only was worthwhile when the fiddle was played…
We are approaching a very important day in the Norwegian calendar - the 17th of May, National Day, commemorating the independence of the country.

Whereas the national day in many countries is merely a welcome occasion to have a day off, it is a milestone in Norway’s identity, and literally every countryman and countrywoman partakes in the many festivities. The dress code is very specific - whoever owns a “Bunad” will have to wear it.

The Bunad is a very conservative garment, often handed down by the elder to the later generations. (Which is fortunate for the younger people, as a traditional Bunad is hellishly expensive.)

Every region in Norway has specific cuts and tissues and bangles and brooches, and they recognize each other right away. A women’s dress is by far more precious than a man’s Bunad - the bride  had to be pretty for the groom and the man had to do more practical things, so the garment wore off more easily.
We have four Norwegians on the expedition team, and of course! They all have their Bunad on the ship, so they can celebrate the 17th of May in style.
These precious things have to be straightened out, aired, and checked, which gives us the fine opportunity to take a closer look. Beau-ti-ful!

If you go really close you discover the finely woven decoration, and the embroidery. And here’s the next topic.
The handling of needle and yarn has a very long history in Norway, as the dresses and garments also were meant to send a cultural (and economical) message to the beholder.
Especially the Hardanger Embroidery developed into an art form that became famous also beyond the borders of Norway.

And no-one else but our expedition leader Karin is a skilled instructor for this craft. So she gathers ten keen students around her and shows them the first steps - it is trickier as it looks.
Everybody is utterly pleased with the first half of the day, so now it is time to head for the mouth of Hardanger Fjord.
The surprise is not little when suddenly there is an announcement over the PA system that our departure is delayed due to a glitch in the portside engine electronic. We have to stay, for the time being.
But what nicer place to be delayed than this one? We are at pier, we can go out for a walk, to one of Eidfjord’s charming cafés, or just stand on deck and look into the evening sun.
The evening comes with no news, still the problem could not be solved. But fortunately the expedition team came up with a wonderful Plan B for tomorrow: Instead of having paid excursions, everybody will be invited to go on the famous ride with the Flåmbana, only we go there by bus and not by ship. Theme with variation, and there is a big round of applause as the new plan is presented.

Email ThisBlogThis!Share to TwitterShare to FacebookShare to Pinterest
Photograph(s) by: Hilde Foss, Steffen Biersack
Newer Post Older Post Home
Welcome to MV FRAM's Expedition Blog!
MV FRAM is the most modern expedition cruise vessel belonging to the Hurtigruten fleet, roaming polar waters and taking people to remote places where only few go. In order to give you the chance to travel with us, even if only on your computer screen, we have created this blog. Here you can see what we have seen and read what we have done.
And, maybe you will be onboard with us one day!
All About MV FRAM - here
FOLLOW US ON FACEBOOK !