After leaving Dover on Sunday, it was time for another sea day to Norway. Once again, we were sailing the North Sea past the oil platforms in the company of several big cargo/container vessels. The weather was in our favor again as the wind was almost absent and the sun was shining bright. Perfect conditions to spend extra time on the decks to enjoy a few drinks and gaze into the distance over the hypnotizing waves of the North Sea. Our sea day was a very informative one as we had several lectures planned during the day. Guests were able to learn many things about Norway, Polar Regions, Fram, our planet in general and our upcoming day in Bergen. 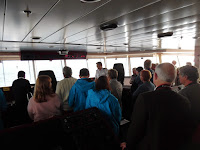 During the morning, we also had one group for a bridge visit. This is always a perfect way for people to get a better understanding of how the ship works and get a glimpse of what goes on “behind the scenes”. The captain welcomed us and started by explaining what all the big screens and buttons are for. Amongst other things, he gave us interesting facts and figures about the ship´s fuel usage and electricity production. After his introduction, guests were free to ask him all sorts of questions that he was happy to answer. Then it was time for everyone to walk around and take some pictures to show family and friends they have indeed been on the bridge of MV Fram!

The Observation Lounge was also the place to be in the evening as we had another whiskey show with tasting hosted by our two Scottish oldies Bernie and Beastie! Their passion and entertaining skills made the evening (once again) a big success and a perfect last evening for our Whiskey Cruise. In the afternoon it was time for a Norwegian delicacy in the Observation Lounge: freshly baked waffles! Our crew definitely managed to get everyone´s attention with their culinary venture as the irresistible smell was making its way through several of the decks. Staff and guests were all enjoying the waffles with whip cream and several sorts of jam while listening to live music from our musician Bjørn.

Email ThisBlogThis!Share to TwitterShare to FacebookShare to Pinterest
Photograph(s) by: Tom Warmolts
Newer Post Older Post Home
Welcome to MV FRAM's Expedition Blog!
MV FRAM is the most modern expedition cruise vessel belonging to the Hurtigruten fleet, roaming polar waters and taking people to remote places where only few go. In order to give you the chance to travel with us, even if only on your computer screen, we have created this blog. Here you can see what we have seen and read what we have done.
And, maybe you will be onboard with us one day!
All About MV FRAM - here
FOLLOW US ON FACEBOOK !