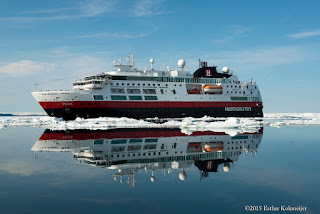 Today we had a soft start on the morning, with lectures and relaxations. Then, in the late morning we landed on Torellneset on Nordaustlandet. Nordaustlandet means the north-east land, and the name speaks for itself, it is situated on the north east corner of the Svalbard Archipelago and is separate from Spitsbergen. 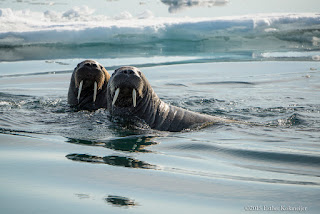 The good weather does not seem to end on this voyage. We had beautiful sunny weather, the ice was drifting fast, and it was moving with the strong currents in Hinlopenstredet. We spotted a large herd of walruses laying on the beach, as well as walruses that were out swimming in the water and doing acrobatics. In the beginning we could even hear a seal that was singing in the water. 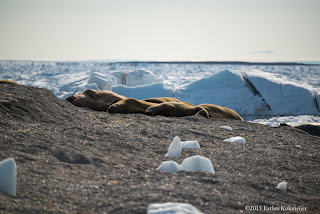 There was also loads of birds in the ice just outside the beach, and we were fascinated about the rich wild life on this seemingly barren place. Two groups went glacier hiking on a glacier (name) that is actually connected to the big ice cap of Austfonna on Nordaustlandet, while some went out with our big polar circle boats to go cruising in the drift ice among swimming walruses. 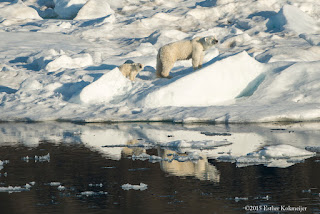 Later in the day, we were going through the drift ice, and we had our dinner as usual, but it was interrupted as we heard on the speakers an announcement that there was a polar bear on the ice. Everyone of course ran out, and we were very happy to see that this was actually a mother with two cubs! They were not shy, and they approached the ship as we were laying still or slowly moving towards them. They were very playful and relaxed, and it was pure joy to watch the two small cubs playing around while the mother was trying to have a nap... 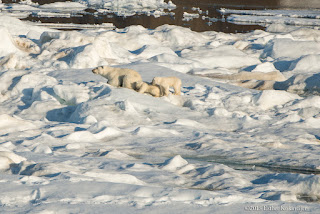 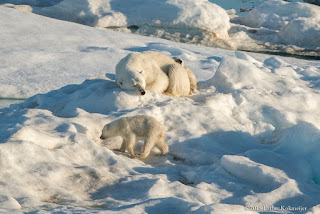