This morning our passengers were given a great bird-watching and photographing session by 2 of our Expedition Staff members, John Chardine and Olle Melander. As usual in this area of the Drake Passage, many Cape Petrels, some Southern Giant Petrels, a small flock of Southern Fulmars, and at least 10 Albatrosses of three different species (the majestic Wandering Albatrosses, the elegant Black-browed Albatrosses and the fascinating Light-mantled Sooty Albatrosses) were up in the air and around the ship to help our passengers in their morning task. As if it had been programmed, the fog arrived and decreased 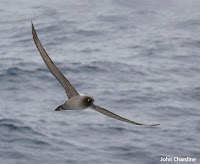 the visibility when the session finished, and it has stayed rather low ever since.

Life on board has been quite busy, getting everything ready for the landings as soon as we arrive in Antarctica. The passengers learned about the optional excursions that they can take in Ushuaia and Buenos Aires and attended some lectures. They have also had time to start getting to know each other and the ship.