This is something that has to be written in capital letters. What - A - Place….!!! Even at six in the morning...remember? We had to put the clock two hours back, so many-a yawning in the mawning. However, the sheer splendour of the city is better than a triple espresso, no doubt.
Brings the poor Blog guy in trouble, though: It is an impossible task to resume everything there is to say about this history-loaden playground of Czars and Emperors, Artists and famous people. Even more as our guides were not only excelling in the necessary languages, but also so very much overflowing of information only a tape recording would do the trick. Which we don't have.
So what about me just presenting a caleidoscope of images, this time with a nice caption each? Anyway, St. Petersburg is visual, bursting with amazing sights, Imperial architecture of dimensions that feels like it dwarfs us. On top of it all is bathed in clear spring sunlight, luring everybody out in the streets, including the many, many wedding couples that swarm out for pictures in front of the most memorable monuments, or the many soldiers that had a rehearsal for the grand parade of May 9.
So, here it comes, follow us through museums filled with world-class collections, across giant squares and to gargantuan statues, put in the middle of them. Enjoy!


The following images take you to the incredible collections of the Hermitage, the "Winter Palace":


As mentioned, this can only be an appetizer. The Hermitage (and I avoid the word "alone") is worth a trip to St. Petersburg. Let's go out now, on a walk to see more of the monumental, but also the "civilian", normal city: 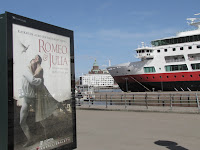 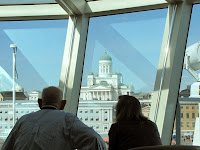 No, it's not a typo. Helsinki means "sunset" in this impossible language, where practically not a single word reminds to any of the other European tongues (the official term for the capital area is pääkaupunkiseutu. Questions?). But Europe it is, and for the first time since Le Havre we dig out our Euro money to go ashore. FRAM goes to pier right downtown, so everything is just a walk away. Buzzing in the sunlight a city awaits which lets you know at every corner: This is where you find art, culture, music, education. The theater adverts are posted on many walls, the seven (!) universities fill the town with young, keen people, and whereever you go, English is spoken flawlessly. 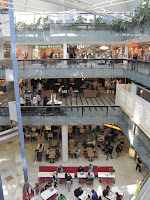 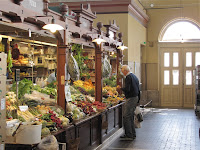 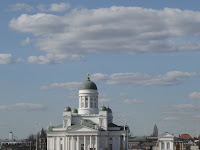 The intriguing Art Nouveau architecture in its national romantic variety contrasts lively with neoclassical buildings and the many vast squares and place leave an overall impression of largeness. 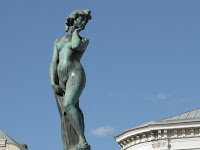 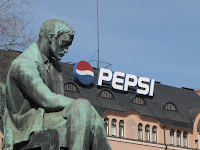 With surprises in the detail, though. When several people stare at the same spot above, it can be a well-organized joke or something very unusual. Two large owls sitting undisturbed on the roof of a mall at one of the biggest and noisiest crossing in Helsinki, peeking down on the baffled crowd. Later I learn from a local that the birds are well-known by the Helsinkians, and that at some time in the year the fledgelings are to be found in many places after half successful flight attempts, only to be brought back to the roof by members of the fire brigade. 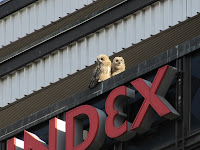 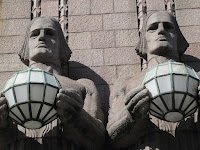 Nice episode, that also sheds a light on the rabbit problem they have in town; why else would birds of prey remain in a location like this… 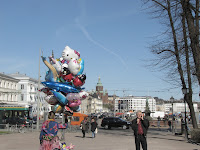 Well, no rabbits where we walk today, be it in the old Kauppatori, the market that has a big indoor hall in accordance to the bitterly cold winters around here, or one of the posh modern malls. Contrast seems to be the motto of Helsinki, the skyline contains not only the prominent rooftops of the Uspenski Cathedral and the Dome, but also bows of cruiseships that come and go here like in Grand Central Station. Old mom-and-pop stores close to posh boutiques, high class restaurants and McDonalds next door. 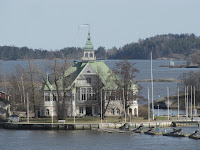 Well, we have our great buffet on board, so no need here. And as the sun sets in Hel-Sinki, we cast the lines and head east into the night. 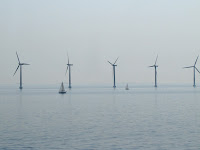 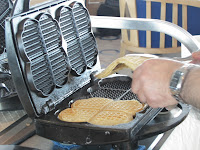 A sea day like from the catalogue - sunshine, sunshine, sunshine. Phew, a lot of free time ahead. What a happy problem to have. So, while the day passes with books and meals and music and lectures (being lured into the lecture hall by creative lecturers) and waffles and watching the world go by, let's use the occasion to learn a little about this big mass of water we are currently travelling. Let's go back in time:
When the world was very much younger, the continents had a completely different shape, size, and especially location. During their errands across our planets surface, driven by the slow but inexorable forces of mantle convection, they sustained many collisions, one of them known as the Caledonian Orogeny, the one that pressed North America against the Baltic parts of Europe and formed a mountain range that encompassed parts of Scotland (Caledonia) but also the entire front of western Norway. This big and in many places highly deformed block was connected to what is today central and southern Europe by a big fault line (Tornquist-Tesseire fault) that scarred the baserock from NW to SE over a long distance and will gain importance later on. These European masses were subjected to another, younger collision, which did not affect the northern parts significantly. It is only important to know that the aforementioned fault worked as a hinge around which the whole   system spun. The hinge itself subsided and formed a depression which subsequently was filled with sediments and is the weakness zone that shall - a long time after - turn into the Baltic sea. 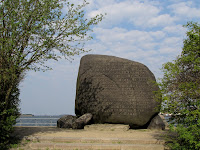 Let's give the continent a break: Let the huge mountain ranges that span from southern England through Belgium down to Bohemia be levelled and carried away by erosion over time, let the oceans rise and fall again, watch the dinosaurs and many other species getting extinct by large-scale climatic events and impacts, witness a strange kind of mammal appear on the stage that walks on its hind legs, look how the continents assume their final position. And then it is time for ice. Enormous sheets of snow piling up in the North, being compressed to solid ice and forced across the land by its own weight, travel down south, doing many things at the same time:
The ice crushes everything that is in the way, carrying the self-made debris over long distances, using it as grinding material when it cuts into higher areas to make fjords, or just  drop it somewhere else, where we find it today as moraine, sander or one of the impressive erratic blocks that are spread out over northern Europe.

When the ice finally retreated, enormous amounts of water were released and filled a shallow basin that had opened right on top of the weakness zone that once was the big fault line, scooped out by the passing ice - the Baltic sea. Please do not take "sea" in the same meaning as "ocean", for this basin contained nothing but meltwater, no salt whatsoever. Only very late, about 9000 years ago (which is practically today after lunch, in geological terms), a tiny connection opened up towards the North Atlantik, bringing in small amounts of salt water, flowing around Denmark.

So what we are crossing today is actually the worlds largest reservoir of brackish water, widely devoid of the abundance of life that is to be found in the depths of a "real" ocean. Speaking of depth: The Baltic "Sea" is very, very shallow, only 52 meters in average. But this won't surprise us anymore now, will it? Now that we have learnt about its origins.


Oh, yes, and then there was the fashion show at night...

Email ThisBlogThis!Share to TwitterShare to FacebookShare to Pinterest
Photograph(s) by: Steffen Biersack, various sources
Newer Posts Older Posts Home
Subscribe to: Posts (Atom)
Welcome to MV FRAM's Expedition Blog!
MV FRAM is the most modern expedition cruise vessel belonging to the Hurtigruten fleet, roaming polar waters and taking people to remote places where only few go. In order to give you the chance to travel with us, even if only on your computer screen, we have created this blog. Here you can see what we have seen and read what we have done.
And, maybe you will be onboard with us one day!
All About MV FRAM - here
FOLLOW US ON FACEBOOK !