A question for you: Is Bjørnøya in Svalbard or Spitsbergen? The use of names is always a bit confusing. In 1194, the Vikings came to a place they called „the cold edge“- or Svalbard in their language. The official name distinction is: Spitsbergen is the main island- while Svalbard is the name for the entire archipelago- including Bjørnøya!

The origin of the name Bjørnøya itself is also quite interesting! In 1596, Willem Barents reached the island and his men killed a polar bear- hence the naming Bjørnøya, the Bear Island.Bjørnøya is a place rarely visited due to it`s remoteness- most tourists in our days fly to Longyearbyen and only a few arrive by vessel and maybe then pass by the island.  Bjørnøya has the reputation of often begin a bit foggy- but what a day today! Calm weather, sun, beautiful reflections! We were able to do both a cruising in front of the magnificent bird cliffs as well as a landing. Being in a Polar Cirkle boat in front of a 400m high bird cliff with thousands of birds above you truly gives you a perspective of one’s own „importance“. Suddenly you feel very small and just in awe with nature! Keep in mind that Bjørnøya is the only piece of land within a long range so many sea birds come here for nesting- or resting. The most abundant species are the Brünich`s guillemot and the Common guillemot, but in the cliffs one also sees Kittiwakes (ca 100.000 breeding pairs), Fulmars, a few Glaucous gulls and Little auk colonies. So our time in the Polar Cirkle boats was just flying by! As the weather was extremely calm, our expedition leader Karin Strand decided to also go ashore- a really rare occasion! The walk up to a cliff offered fantastic views into the bay and „our“ MV Fram. 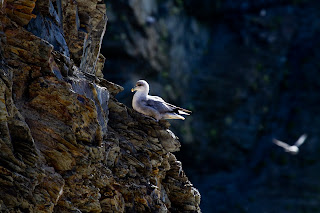 Email ThisBlogThis!Share to TwitterShare to FacebookShare to Pinterest
Photograph(s) by: Camille Seaman
Newer Post Older Post Home
Welcome to MV FRAM's Expedition Blog!
MV FRAM is the most modern expedition cruise vessel belonging to the Hurtigruten fleet, roaming polar waters and taking people to remote places where only few go. In order to give you the chance to travel with us, even if only on your computer screen, we have created this blog. Here you can see what we have seen and read what we have done.
And, maybe you will be onboard with us one day!
All About MV FRAM - here
FOLLOW US ON FACEBOOK !