Africa - A new Continent for Fram 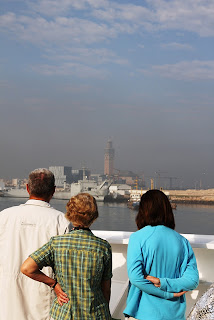 A special day for Fram,  the port of Casablanca, the largest city in the Kingdom of Morocco, North Africa.  The very first time that the ship has been to this Continent.  Approaching in misty conditions the tower of the Hassan II mosque was one of the first sights, its minaret the tallest in the world at 210 m.  Designed by French architect Michel Pinseau and built on reclaimed land, almost half of the surface of the mosque lies over the Atlantic Ocean.

The calm of the mosque contrasted with crowded and hectic scene of other parts of Casablanca.   Local tea provided a welcome break.  By comparison those who headed to visit the political capital of Rabat loved its open spaces and groomed appearance.
A group set off from the ship to see Marrakesh, which entails an overnight stay, we look forward to hearing of their adventure when they rejoin Fram in Agadir tomorrow. 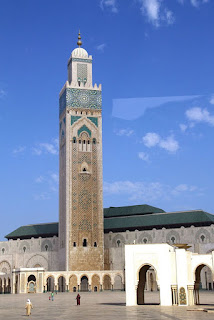 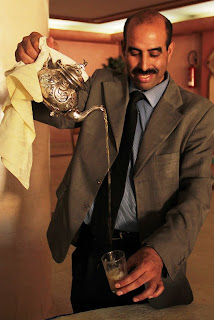 After a hot, steamy day the temperature dropped quickly after sundown. Then this evening, out of the freezer came a large block of ice for carving. Galley colleagues Rudolfo, Barry, Peter and Arsenio demonstrated their skills in producing cake and table decorations for an appreciative crowd. 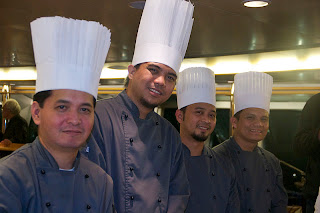 Email ThisBlogThis!Share to TwitterShare to FacebookShare to Pinterest
Photograph(s) by: Fiona Jobling, Suzie Wicks
Newer Post Older Post Home
Welcome to MV FRAM's Expedition Blog!
MV FRAM is the most modern expedition cruise vessel belonging to the Hurtigruten fleet, roaming polar waters and taking people to remote places where only few go. In order to give you the chance to travel with us, even if only on your computer screen, we have created this blog. Here you can see what we have seen and read what we have done.
And, maybe you will be onboard with us one day!
All About MV FRAM - here
FOLLOW US ON FACEBOOK !