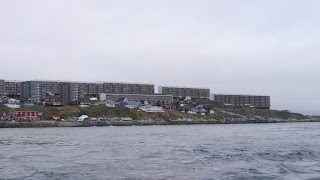 After days of sunshine and blue sky this morning looks a little bite grey. The clouds are deep we can’t see much of the shore, so it’s a good time for lectures, f. ex. about the development in Greenland. What will be in future? Sabine doesn’t give answers to us but some information of the present Greenlandic society. Before lunch we all know that we’ll come to Nuuk. FRAM is at full speed, we see icebergs only from time to time and everything seems fine. Some seals are quite curious and also two humpback whales are close to FRAM.

We arrive in Nuuk with a little delay, but everybody is ready to leave the FRAM. Nuuk is the capital of Greenland around 16.000 inhabitants which is more than 25% of all Greenlanders. It is a real capital with everything you expect like the university, the government, shopping street, and in the end of July the first Greenlandic shopping mall will be opened. Most of us are more interested in nature and culture. One group is hiking the mountain Little Marlene one of the close by mountains in Nuuk. It is really amazing to experience the nature of the capital.

Nuuk is fast growing town and there are changes and new buildings every year. During our city-tour we see the new suburb and the beautiful swimming hall. The tour ends up in the old colonial part with the cathedral, the oldest and smallest church in town.
Most visit the National museum where the famous mummies from Qilakitsoq 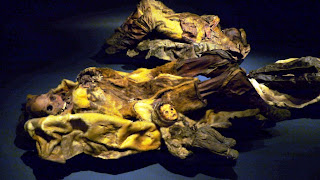 are presented, strolled around in the lovely old colonial part. In Katuaq, the cultural center, open the summer exhibition about three Swiss expeditions in Greenland which will be shown until the end of July. 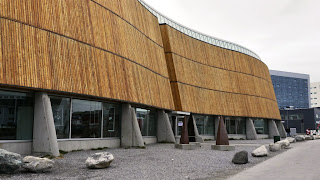 The third group goes out by boat to the Nuuk Fjord to the beautiful waterfall. The fjord is also well known as a good place for whale-watching, but unfortunately – the whales are out of town today. 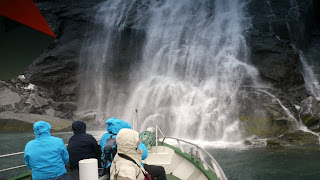 In the end of the day all of us are totally tired after a very exciting day in Greenland’s capital. 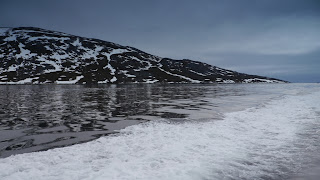