What's All The Fuss About? 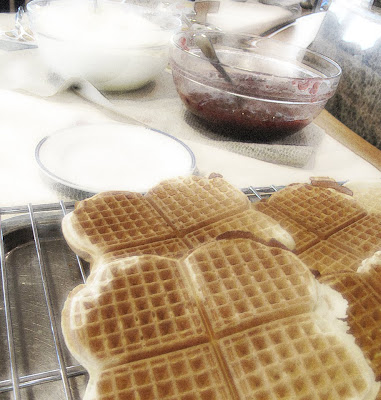 15:30 and a delicious aroma pervades every deck of the ship.  Waffles!  M-m-m-m-m.  The Observation Lounge on deck seven has waffles.  Edgar, one of our bartenders is there with a trio of waffle irons, a large tub of waffle batter and all the fixin's; whipped cream, maple syrup, strawberry sauce. Wipe the drool from your chin and join the queue. 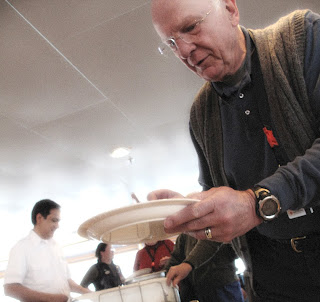 Here we are, enjoying waffles in the middle of the Scotia Sea, following Shackleton's footsteps.   I don't know what all the fuss is about.  The journey from Elephant Island to South Georgia doesn't seem so difficult. It's true to say that Shackleton didn't have a waffle iron.  That would be a hardship.

The wind continues to drop, albeit very slowly.  We still have big seas with 10 metre waves. The sea is following on our quarter stern which translates into a nice, rolling, comfy ride for us.  Ah, Ernest.  If you had only had Fram. The truth of the matter is, had I been on the James Caird with Shackleton and his five men I would not have survived.  Most likely I would've been thrown overboard for being a quivering mass of useless jelly. Me on the Scotia Sea without waffles?  Forget about it.
The Expedition Team is impressed with the stalwart nature of all our fine guests on board.  We are pleased that the lecture rooms are full even in these heavy seas.  We are happy that you are so attentive and have lots of great questions with which to challenge us.  It makes our job a pleasure, so thanks for risking  a few bruises in the lecture rooms!

Email ThisBlogThis!Share to TwitterShare to FacebookShare to Pinterest
Photograph(s) by: A. Wenzel
Newer Post Older Post Home
Welcome to MV FRAM's Expedition Blog!
MV FRAM is the most modern expedition cruise vessel belonging to the Hurtigruten fleet, roaming polar waters and taking people to remote places where only few go. In order to give you the chance to travel with us, even if only on your computer screen, we have created this blog. Here you can see what we have seen and read what we have done.
And, maybe you will be onboard with us one day!
All About MV FRAM - here
FOLLOW US ON FACEBOOK !