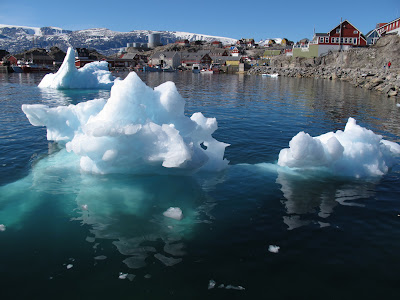 Our stupendous luck with the weather continues!  We dropped anchor just before 10:00.  The first people off the ship were the folks going on morning excursions but after that we were all free to go ashore and explore the community of Uummannaq.
After lunch at 13:30 about 60 people set off on a guided 2.5 hour hike to Santa’s Hut.  Along the way we saw nine different species of wild flowers which included; Lapland Rose-bay,  Entire-leaved Mountain Avens, Arctic Mouse Ear, Moss Campion, Purple Saxifrage, Blue Heath, and one lonely Artic Poppy. 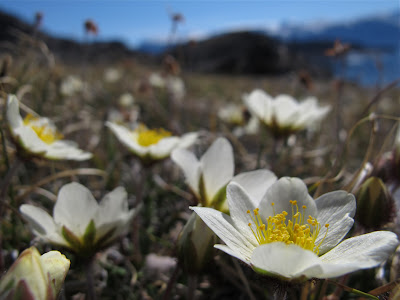 We are now at  ~ 76˚32' N and spring arrives later here.  These were the first few flowers bravely baring their petals to the warming rays of the Arctic sun.  Rays that (barring a cloudy day) are now beaming down 24/7 until the end of July.  In a few days there will be a profusion of wildflowers but even now, if you looked about carefully, you could see small patches of bright pinks, purples, yellows and whites. As I walked along I couldn’t help wondering if these flowers received more or less daylight than the ones at home.  Certainly it is a short growing season here, but an intense one! 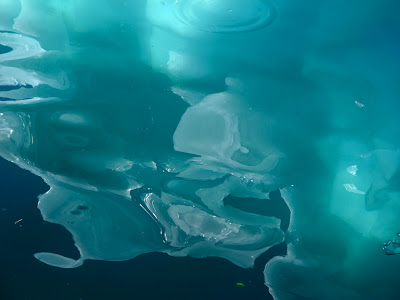 On our way back to the ship the expedition team led us on a slight detour from the well-marked path to a spectacular view.  You could see for miles. Far below us lay Uummannaq and the MS Fram.  You could see hundreds if not thousands of icebergs.  It was a terrific way to end the hike.
At 16:30 we were all back on the ship.  We lifted the anchor and  set off for our second destination of the day, Ukkusissat.  We had ideal conditions for scenic cruising. 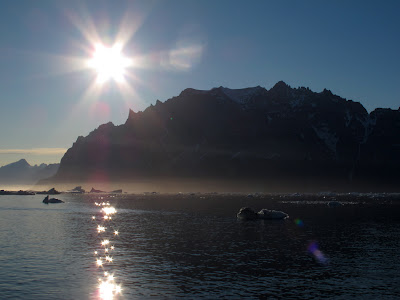 As we approached Ukkusissat there were icebergs everywhere.  So many icebergs that we had to reduce speed in order to make our way through the dense ice safely, which of course delayed our arrival time in Ukkusissat by about a half hour.  At 20:00 we put the polar Cirkle boats in the water and began bringing people from the village to the ship.  In fact it seemed like the entire village came aboard!  This was our first visit of the year so they were happy to see us and we were equally happy to see them.  Over the years we have made some very good friends in Ukkusissat. 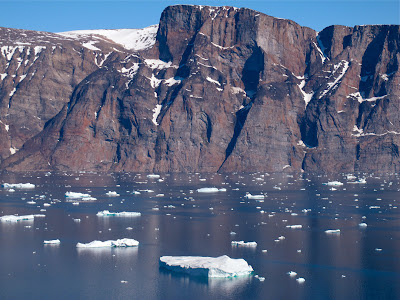 Soon everyone was on board. We all rendezvoused in the Observation Lounge where the people from Ukkusissat entertained us with folk singing and dancing and modeled some of their traditional clothing for us.
At about 21:30 we all went to the village and explored at our leisure.  The two musicians from the ship brought their guitar and accordion on shore.  It was their turn to entertain everyone.
By 23:00 everyone was back on the ship and fifteen minutes later we were underway once again.  Phew!  I'm tired!  If tomorrow is half as good as today it will be a spectacular day.