Our last day in this great place

Oh, what a day! We woke to brilliant blue skies and warm air. The latter reminded us that we were on the south coast of Iceland which is influenced by the North Atlantic Drift- a current of warm water originating off Florida as the Gulf Stream. It is what keeps northern Europe and Iceland MUCH warmer that they should be if you just look at latitude.

So today we were headed for the iconic Westmann Islands. They got their name from the fact that when the Norse came west to Iceland, they would stop off in Ireland to take slaves on their way. The "west men" were the slaves from Ireland.

Our first close look at the Westmann Islands was of Surtsey (Island of Surt). Your faithfully blogger is old enough to remember the big news of the birth of Surtsey in 1963. From the North Atlantic rose explosive columns of smoke and ash and together with the molten lava, grew quite quickly into the island we see today. Since then (only a little over 50 years ago- a geological blink of the eye) the island has been eroded somewhat by the sea and is somewhat smaller than it used to be. Perhaps it may end up as a pinnacle of hard rock sticking out of the ocean (as we saw around the islands). Remarkably Surtsey looks like it's been there for millions of years! 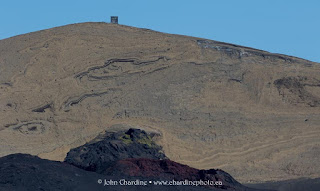 From Surtsey, we had great views of the mainland and the Eyjafjallajokull glacier. The volcano associated with the glacier erupted a few years ago and caused a major disruption in trans-Atlantic air traffic because of the ash put up into the air and atmosphere. Here it is to the right in this image. 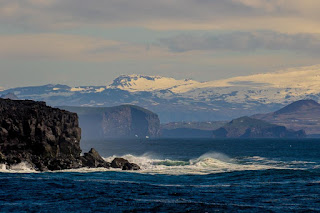 As we arrived to Surtsey, we were very lucky to see a pod of Orcas (Killer Whales). Close to the Orcas was a Humpback Whale and we were pretty sure that the Orcas were hunting the whale. 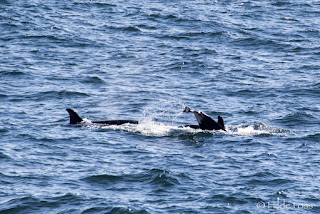 After Surtsey we cruised to Home Island- Haemaey- the largest in the Westmann Island archipelago, and the most populated. We had several opportunities to see the island via bus, walking or from a small cruise boat. A strong theme on Haemaey is the eruption that occurred in 1973. This destroyed 300 houses in the town, dumped millions of tonnes of ash over the rest of the town. Houses were buried half way up the walls and the town grave yard was inundated. However, you would never know the ash had been there! 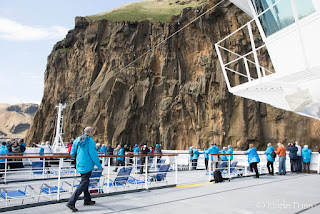 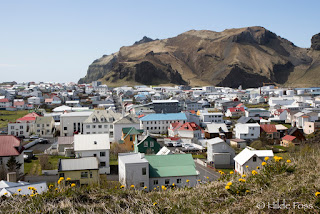 On the walking tour we climbed up the volcano that was created in the 1973 eruption (see the red mountain in this image). It was thrilling to stand on new land, only a few decades old! 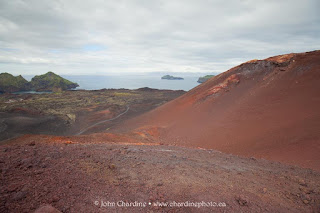 In the eruption museum, one of the houses that was buried in ash has been excavated. The museum was brand new, beautifully designed and very sophisticated. 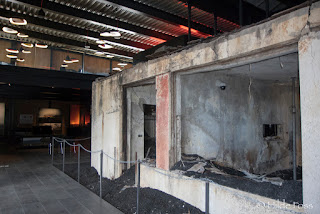 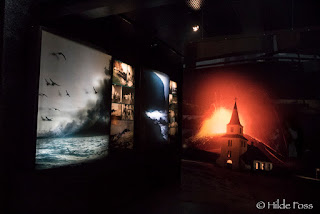 There is a tradition in the Westmann Islands for hunting puffins using a net called a fleygur as dipicted here on the side of a building. 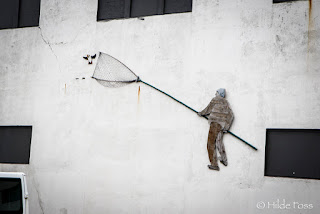 As this is the last day of our Iceland circumnavigation, here is a commemorative image of our great Expedition Team! Hi everyone!!! 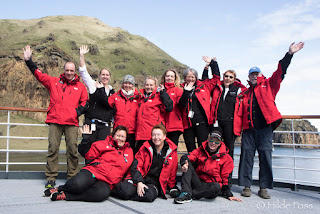