Everybody looked a bit worried at the breakfast table: outside, the air was filled with snow flying past horizontally as we passed Neptunes Bellow, the narrow entrance into the chaldera of Deception Island. However, as if by a miracle, as soon as the first Polar Circle Boat hit the water, the sky was lifting, the wind calmed down and the sun came out! The dark volcanic mountain sides were still powdered with snow, and we spent a perfect morning at Whalers Bay at Deception Island.
In the evening, we landed at the Polish Research Base 'Arctowski'. Here we saw again all three species of penguins, the Chinstrap-, Gentoo- and Adelie penguins. Additionally, many Fur seals populated the beaches, and even some Elephant seals were hauled out! Arctowski was our last landing of the season in Antarctica. As we left, we took on board three Polish 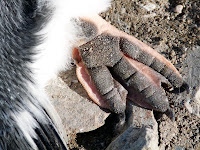 scientists who will accompany us to our final port of call in Ushuaia. We are pleased to close our season in giving a hand to those who conduct scientific research in the Antarctic!
The pictures of the day were taken by Sara Jean Stewart and Maria Schoenmaekers.