Along the Lusitanian coast - Porto

Hmmm, after a first good nights sleep people wake up to a funny phenomenon: The ship is moving...
In fact, we have pretty strong westerly winds that drive the clouds across the morning sky and enshroud us with a magical indistinct light. In some, also the stomache seems to be moving due to the seas - the morning is rather quiet in the breakfast halls and lecture theatres.
But as we make our way north, the spirit is rising considerably, and as we make port in Leixoes, the gateway to "Oporto", which simply means "The Harbour".
On the pier, the excursion buses are waiting to take us there and then either on a cruise on the Douro river, or alternatively way back in time, to Guimarães: This little city maybe not the oldest settlement on the Iberian Isle - which has seen anything from early Iberic people to Celts, Romans, Phenicians and Carthaginians - but is actually the birthplace of Portugal with a history dating as far back as 960, when the first castle was buildt. The Cathedral of Guimarães seems light and lofty and is a stark contrast to the dark and heavy palace of Bragança. 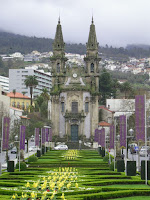 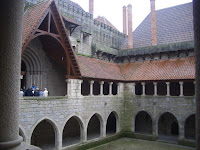 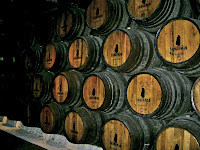 Both excursion end with a delicious tasting of white and dark Port wine, which is in fact nothing else but grape juice blended with Brandy to keep it from turning sour, although this is admittedly a rather forensic description of a very tasty national drink.

For those who rather take their own pace, a shuttle bus is going from pier to downtown Porto.For hundreds of years this colorful city with its ubiquitous "Azulejos"(blue tiles), red roofs and green riverbanks has been the centre of Port wine expertise. So it is not surprising to see many of the "Rabelo" boats on the Douro river, some even with Port wine barrels. Good Friday should make you expect this very catholic place being in a religous turmoil, but except some celebrating student groups there didn't seem to be less hustle than anywhere else. 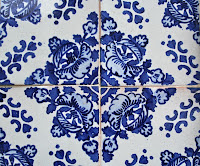 In the evening everybody is back, happy from the sights and - maybe - also a little from the Port wine. So, now it's time to get a good night's rest, because tomorrow we'll be heading for our probably longest excursion day in Santiago de Compostela.

Email ThisBlogThis!Share to TwitterShare to FacebookShare to Pinterest
Photograph(s) by: T.Hogan; K.Kern; A.Kertelheim;S.Biersack
Newer Post Older Post Home
Welcome to MV FRAM's Expedition Blog!
MV FRAM is the most modern expedition cruise vessel belonging to the Hurtigruten fleet, roaming polar waters and taking people to remote places where only few go. In order to give you the chance to travel with us, even if only on your computer screen, we have created this blog. Here you can see what we have seen and read what we have done.
And, maybe you will be onboard with us one day!
All About MV FRAM - here
FOLLOW US ON FACEBOOK !