In the morning we can detect some commotion within the Norwegian crew. The reason is obvious: After months and months abroad, after a whole last summer in Greenland and Canada, after travelling down south in October, after a long and exiting season in the rough waters of Antarctica, a peaceful crossing back to the north from Buenos Aires, and finally after Lisbon, La Coruña, Bordeaux, Honfleur and Dover, MS FRAM at last reaches the shores of Norway. It is as if we are preparing a wonderful party, all the officers are scheduling meetings with their families, friends, the coastline is a well-known sight, for many since their childhood, suddenly we hear stories, anecdotes and episodes from villages that are just around the corner. Home! The good mood is contageous, everybody walks around with a big smile.
But this day is not only a remarkable day for the Norwegians, the entrance into the Stavanger Fjord is one of beauty and stark contrasts. Huge drilling rigs indicate that we are approaching the hotspot of Norwegian (and international) oil production, sitting right next to pittoresque tiny white cabins in forest clearings that look almost a little forlorn in the shadow of their gargantuan neighbours.

Wonderful smooth rocks emerge from the water, reminding every skipper and captain: This is Norway, you'll better know what you're doing. Our captain surely does, and a while later we reach Stavanger, fourth largest city in Norway. We go to pier smack in the city center, the smallish houses looking really small compared to our actually not-so-big ship. It's all a matter of scale. 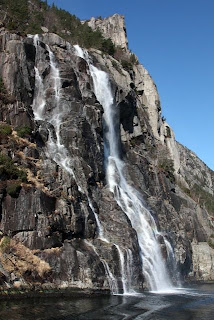 Those who are not going on the after-lunch sunshine trip into the narrow and scenic Lysefjord with it's high cascading waterfalls also take advantage of the splendid weather for a gentle stroll through peaceful Stavanger, visit the old cathedral or the high-tech Petroleum museum, or the tin can museum in the old town that reminds of the times near the end of the 19th century, when the conservation of sardines in cans led to unexpected and enormous riches in the area.
Later on it's time for fare-well to friends and family and we steer into a magic sunset. Now we will stay a while on the coast of Norway FRAM - the feeling of being home will last.

Email ThisBlogThis!Share to TwitterShare to FacebookShare to Pinterest
Photograph(s) by: Tori Hogan; Steffen Biersack
Newer Post Older Post Home
Welcome to MV FRAM's Expedition Blog!
MV FRAM is the most modern expedition cruise vessel belonging to the Hurtigruten fleet, roaming polar waters and taking people to remote places where only few go. In order to give you the chance to travel with us, even if only on your computer screen, we have created this blog. Here you can see what we have seen and read what we have done.
And, maybe you will be onboard with us one day!
All About MV FRAM - here
FOLLOW US ON FACEBOOK !