Our day began with a lecture by Tudor Morgan reviewing his Antarctic experiences.
He wintered at Rothera Station then spent several summer seasons with a geologist or a physicist at remote inland field camps. Some of these camps were so far inland that their small plane had to be refueled three times to reach the research destination. At present Tudor is the Operations Manager for the United Kingdom Antarctic Heritage Trust (UKAHT), an NGO that preserves historical buildings in Antarctica. The Trust’s program is primarily funded via the profits from the sale of the clothes, maps and cards that we buy at the small shop the Trust operates at Port Lockroy. 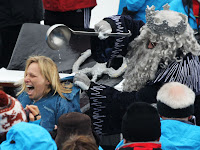 Before lunch, exactly at 11.01 o’clock, the ships horn sounded as we crossed the Antarctic Circle. King Neptune appeared and we were all welcomed to his ‘southern realm’. Some of us were initiated with an icy dousing as we approached the presence of his highness.

In the afternoon the weather remained cooperative and we visited the Detaille Island site. At the end of March 1959 the station personnel had only a few moments notice to abandon the station and dog-sled 48 km (30 miles) to the nearest ship for evacuation. At present a 4 person UKAHT work team is re-roofing the main building and cleaning and drying the interior contents. The goal is to preserve the building with its contents as a museum.

Our 12 hours of fun concluded with a southerly traverse of 13km or 8m through the Gullet. Both sides of the narrow channel are bordered by high peaks and steep glacier. In fact a large glacier calved just as the FRAM passed by. Orcas, many seals, a cormorant rookery and a few penguins all entertained us as our day drew to a close.

Email ThisBlogThis!Share to TwitterShare to FacebookShare to Pinterest
Photograph(s) by: Petra Glardon
Newer Post Older Post Home
Welcome to MV FRAM's Expedition Blog!
MV FRAM is the most modern expedition cruise vessel belonging to the Hurtigruten fleet, roaming polar waters and taking people to remote places where only few go. In order to give you the chance to travel with us, even if only on your computer screen, we have created this blog. Here you can see what we have seen and read what we have done.
And, maybe you will be onboard with us one day!
All About MV FRAM - here
FOLLOW US ON FACEBOOK !