South of the Polar Circle

We made it! We crossed the polar circle at 10.15 this morning. And for those who do not believe us: have a look at the picture – the photographic evidence clearly shows the ship passing this magic line! 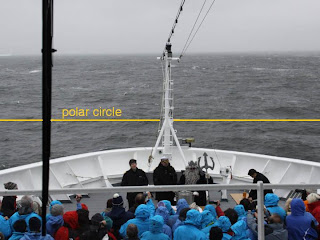 That means we entered someone’s very own kingdom today – Neptune’s kingdom! In person, King Neptune, together with our captain, welcomed us at the bow of the FRAM. And for the brave ones among us he had a special surprise: the polar baptism (ice cubes down our neck)!

According to our schedule, we arrived at Detaille Island during lunch time where we had planned an afternoon landing. However, strong winds made it impossible to go ashore. We could see the big swells and breaking waves crashing against the islands shoreline. 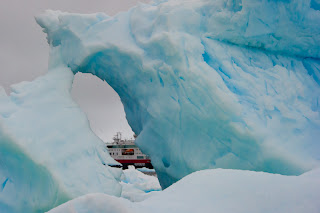 That is when plan B was activated. It consisted in sailing further south towards the famous Gullet Channel. Once a sheltered place was found close to the entrance, our expedition leader announced the alternative program: ice cruising in the polar circle boats!

It was still foggy and overcast, but this is exactly the light you need in order to be able to see the beautiful different shades of blue in the ice. In addition there was the dramatic effect of the light on the sky, the water and the entire scenery. Our Polarcirkle boats turned out to be small icebreakers which pushed their way in between brash ice and among icebergs. Crabeater seals could be seen from a close distance and snow petrels accompanied us in the air. It was a truly overwhelming, breathtaking experience that most of us will never forget! 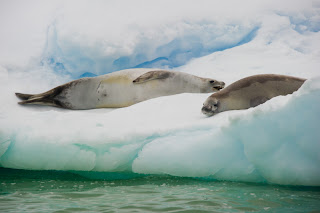 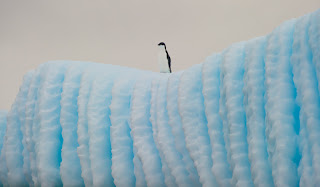 Email ThisBlogThis!Share to TwitterShare to FacebookShare to Pinterest
Photograph(s) by: Karsten Bidstrup, Petra Glardon
Newer Post Older Post Home
Welcome to MV FRAM's Expedition Blog!
MV FRAM is the most modern expedition cruise vessel belonging to the Hurtigruten fleet, roaming polar waters and taking people to remote places where only few go. In order to give you the chance to travel with us, even if only on your computer screen, we have created this blog. Here you can see what we have seen and read what we have done.
And, maybe you will be onboard with us one day!
All About MV FRAM - here
FOLLOW US ON FACEBOOK !