The Magic of Light and the Power of Oil 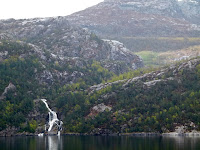 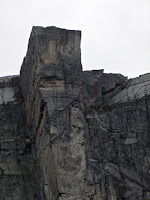 When you announce a very early start for next morning, the reactions are not all the way unanimous, since sleep is a precious thing, especially on holiday. But as soon as we turn into Lysefjord this morning around sunrise, all is forgotten - this place is enchanted. Vertical walls of ice-polished rock are fencing us in, waterfalls are gushing down the slopes, and on the few ledges visible in the cliffs farm houses are squatted against the rocks, like glued into the landscape. Wet clouds are sitting in bowl-like depressions, and the morning sun is putting up a good fight to be seen here and there. 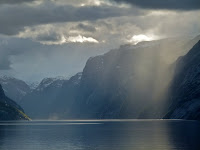 In silence we glide through this wonderland, no waves are disturbing the peace, the ocean is too far away. What a start!
The fabulous Preikestolen is looming high above us, a sheer impossible platform, several hundred meters high, destination and spectacular climax of many hikes in the area. We learn as we roll along, about the first settlers here who had to row their boats in and out, about farmers who tied up their children with ropes in order not to have them fall down into the deep. A rough life, a beautiful life. 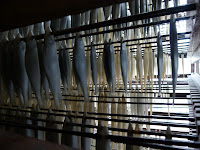 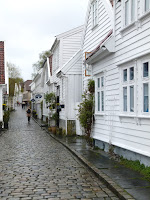 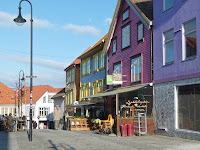 The fog that enshrouds us when we exit the fjord seems to be a boundary between two worlds. As it lifts, we set our eyes on a modern, technical world, albeit with a touch of the past - Stavanger, the city of oils (No spelling mistake here - we will learn more about that in a minute). We pass oil rigs under construction, huge structures of steel, powerful stout supply ships are moored next to the old houses, where we also go to pier. It's like parking in people's front yard, only with a 114m ship. 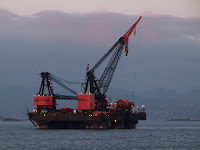 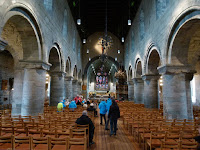 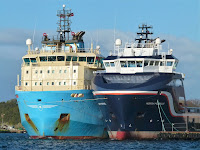 Two excursions today, one with rain, one without. Murphy's law requires that the one with the rain is the walking tour... But nobody cares much, instead they are all ears for the many informations given by our guide about the old town, the connection between sardines and the graphic design industry (for the can labels, sounds funny but was a significant factor in the old days), the church, a rare specimen in roman and gothic style, built after a deal between king and bishop, involving the former's multiple love affairs, and the magnificent petroleum museum with its reconstruction of an oil rig for interactive fun. 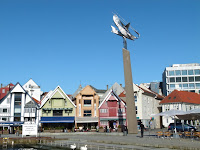 Later in the afternoon the weather gods show mercy and the air gets crisp under the blue Nordic skies. 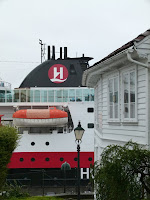 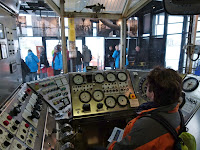 And suddenly it is time to board FRAM again, a full day in the town of two oils (olive oil for the sardines, and petroleum, of course) is over. Night falls quickly, the temperatures drop to chilly, so everybody is happy to be inside while we make our way out of the Stavanger Fjord.