All aboard, we're going to the Mountains! 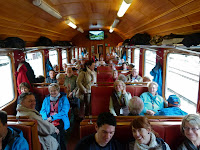 Traveling the Norwegian Fjords takes the mind up to a test. We all know holidays in the mountains, we all pass time at the sea. Very often we have a favorite, there are clear "sea people" and determined "mountain goats". With FRAM, you don't have to make this distinction. We bring you right into the mountains, on board a comfortable ship... 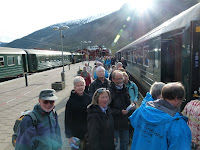 But the mountains are incredibly near, not only on one side but on both, when we enter Naerøyfjorden this morning - BEFORE sunrise. A surprisingly large amount of people is already milling on the decks, and it is worth it, the steepness of the surrounding cliffs is mind boggling. 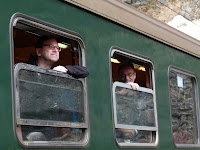 Around we turn, just before the little old Viking village of Gudvangen, in order to make it on time to our scheduled morning destination, Flåm. Situated in the very end of Aurlandsfjorden, it is the departure point for one of the most famous train rides in Europe. Built in 20 years of rock-scraping agony, it winds into the mountain slopes with remarkable steepness, raising more than 860 meters on a mere distance of 20 kilometers. The resulting slope of 5.5% doesn't sound so much if you drive a car, so for dramaturgical reasons the operators rather call it 55.5 per mill... 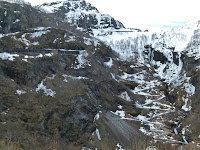 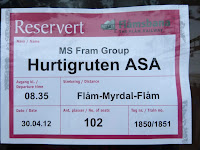 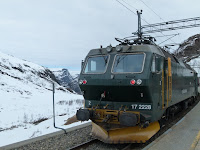 A large group has signed up for this shaky adventure, and precisely at 08:35h in the morning we take off in our own coach, which certainly adds to the touch. A squeak, a hiss, a rattle and a clank - this is the music this trains dances to. A brief stop right next to the roaring waterfall Kjosfossen is THE photo opportunity, before we roll into Myrdalen, tiny little train station in the mountains. Here you can change to the Oslo-Bergen rail, which makes the Flåmbana such an important piece of infrastructure.

After a brief stay it's "all aboard" again, and we backtrack down to Flåm, where FRAM is waiting in the sunshine. 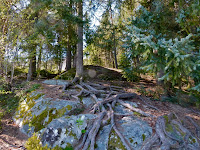 This shall not be our last mountain episode for today. The afternoon sees us in Balestrand, cosy town on the border of the wide expanse of the ...fjord. It houses a couple of boarding schools, sports a beautiful Anglican Stave Church and several culturals projects, relaying to its past as an artist's colony in the late 19th century. So it invites for walks as well as for one of our two excursions. One is entirely dedicated to the cultural history and present of the place, people learn a lot about churches, art history and the early days. 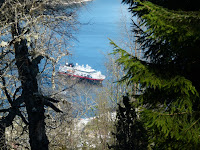 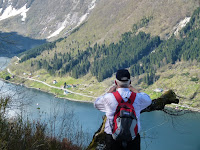 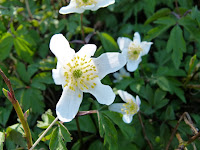 The other tour is physically demanding, but a real treat on a sunny day like this: A hike into the slopes of Furefjellet, the sugarloaf-shaped mountain that forms the towns backdrop. A small group of intrepid hikers takes the ascent and is rewarded by probably the most amazing views on this trip so far. The forest is untouched and with its gnarly trees even in the sunshine a stimulus to bring up stories about saga creatures like Trolls, Hildas, or Shota. None of them show up, though. However, it is a sweaty business, and a muddy one, too, as the hike leads above the snow line, where the spring melt has transformed the ground into a wet swamp. With dirty boots and a big smile everybody returns to the ship, and we sail into a fairy-tale sunset. 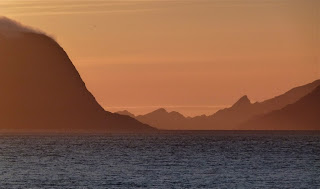