Ice, Ice, Ice
We could see, hear and feel the sea ice during the night. It was hard to go forward. During the day we got updated about the ice situation and the expected landing time. The landing in Daneborg was postponed and later we received the information, that there was no chance to go there, because the station leader had some important visitors. Nevertheless it was beautiful standing outside and looking at the huge amount of drift ice around MV FRAM. A situation and a surrounding of being in an icy wonderland.

In the evening we were informed about the plans for the next day, a landing a Eskimoneset in the morning. The excursion “Polar Circle Cruise” was mostly following the FRAM, but in a sudden one boat stuck in the ice for some while.


Monday, August the 31st
Another day in the ice ….
Announcement in the morning: Polar bears!!! It was a female with her cub, both swimming in front of FRAM, heading for an ice floe to relax. After they reached it, they relaxed, sleeping, blinking at FRAM and yawning. We all had time to take lovely pictures which we afterwards shared with each other. That was a wonderful hour we spent on deck in the sunshine.

The next updates informed us about the further plans; we were heading south to find a nice landing side. This day would be another day in the sea ice day. First some more lectures and later we started with a polar circle cruise for all passengers. It was amazing being closer the ice floes and the three huge plateau icebergs, which are normally quite rare in this region.
In the end of the day we were all happy. Another beautiful day in the ice.

1.9, Tuesday
Myggbukta
Finally we made our first land-fall in NE-Greenland J
This morning when we woke up we had anchored at Myggbukta in NE-Greenland. This used to be a Norwegian trapper and radio station. It is also the place were Norway tried to occupy an area between 71-74 N, named „Eirik den raudes land“. This happened in 1931, but Norway lost in the international court in Haag in 1933. Since then the station has been used by travellers in the national park and the SIRIUS patrol.

It was not possible to land at the station due to heavy pack-ice, but we found an excellent spot 6 km east of the station. 50 guests went on a completely new hike in the hills, where they saw musk oxes and had a fantastic view over Fram, the landscape and the pack-ice. The hike went up to 365 metres above sea level and was 10.5 km and took 4 hours.

Those who did not go on the hike could enjoy a 2 ½ hours walk on the lower parts of the slop with wonderfull weather, seeing an arctic fox and quite a number of muskox (aka hippie-cow).
After the morning landing we tried to sail in through the pack-ice to Keiser Frans Josef fjord, but in the end the ice got to dense and we had no other choice than to retreat and find our way out of this maze consisting of annual ice and multiyear ice. The weather has been great with sun, no wind and temperatures around +2 degrees.

In the evening the expedition team had a RECAP on deck 7, where our guests could ask questions about what we have been doing on the cruise so far.
For 10 of our guests beds where being prepared for the Arctic Skye, where you can sleep on deck 7 under the sky experiencing the crisp clear air.

At sea. During the night we have slowly progressed through the heavy pack-ice and out at sea. It took good skills from the captain and the officers to break through the ice-fields.
We are now steaming south towards the southern entrance of the national park. We will hopefully be able to enter through Davy Sound and Kong Oscars fjord and have a landing in the late afternoon.

The weather is treating us well, with calm seas, no wind and some cloudy weather.

Lectures in photography and ice is at the table.

In the evening we navigated through dense fog and managed to make a short landing for everyone at Antarctic Havn. During the landing the fog lifted and we got a spectacular evening sun and clearly saw the mountains across the fjord. Antarctic Havn is famous for the ship Antarctic which came her on a expedition in the late 1800 hundreds and also for Helge Ingstad. Helge Ingstad is famous for finding the Viking settlement on Lanse aux meadows and also because he was the first an only sysselmann (governor) for the Norwegians during the dispute about Eirik den raudes land in NE-Greenland, where Norway claimed this part of Greenland in 1931. Helge Ingstad stayed her from 1932-33 where he also wrote his famous book “øst for den store bræ”.

3.9, Thursday
This morning we woke up at Blomsterbugten. During the landing it was quite foggy and cloudy, but this soon turned into a beautiful sunny day. The kayakers and the hikers were out, as well as Amundsen and Nansen. Many of our guests had a fantastic landing seeing muskox and arctic hares. There is a small trappers cabin at the beach, named Varghytten (the wolfs hut) built in 1930 by Norwegian trappers. During the lunch and the rest of the day we cruised with the Fram into Isfjord to see spectacular iceberg calving off the inland ice sheet and sheer cliff rising steeply up to over 2000 metres. There was absolutely no wind and people enjoyed the fantastic light and the geology spanning hundreds of millions of years back in time.

We managed to have two polar circle boat cruises in Isfjord, one in the afternoon and one in the evening.


4.9, Friday
The weather in NE-Greenland was still showing us the best there is. Beautiful sun and sky clear. We had quite a wind on the landing on Ella ø, but we had a good long walk around the station and the surrounding area. Ella ø is the summer station of the Sirius patrol and is in use from the end of July to the end of August. From here they patrol the fjords and lay out provisions in the small hut for their travels during the winter time when the water is stiff.

The original station was built by the Danish Geologist Dr. Lauge Koch in 1931 and was used during numerous expeditions to map the geology and topography of the area. Today these maps are still some of the most detailed ones!!!
After the landing we steamed southwards through the picturesque Narhval Sund down to Alpefjord. Here we put the small boats in the water and did a 30 min ice-cruising in-front of the glacier Gully and Sefstrøms gletcher. These glaciers drain the Staunings Alper which are some of the most alpine and highest mountains in the area, up to 2842m. Until 1977 the two glaciers had a frontline of 5 km, building a dam to the back part of the Alpefjord.

5.9, Saturday
Due to the ice conditions deteriorating in the fjord it was the possibility of delays and  cancellations but luckily the weather was absolutely fantastic on our landing in Nyhavn, Mestersvig. Nyhavn is the harbour area to the Mestersvig airfield, currently inhabited by two men on a yearly basis. This used to be mining town until 1962, when the lead and zinc mine was closed down. The airfield continued to be in use as the gateway to the nationa and the inhabitants in Scoresbysund, but in 1985 scoresbysund got their on airport and mestersvig was closed down and is today mostly used as a military airfield.

Due to the ice conditions we continued out of the fjord encountering quite some ice and also two polar bears and some large flocks of harp seals. The water was flat as a pancake and the sun set fantastic.

6.9, Sunday
During the night we had left the nationalpark and anchored up in Scoresbysund, a small native village with app. 430 souls. The weather god was still smiling at us and we had a good day looking at the town, little puppies, emptying the souvenir-shop and getting an insight into the daylie life of this town.

During lunch we turned south towards Iceland and the western town of Isafjordur. The forecast looks fairly good so the chance of a smooth ride is good… 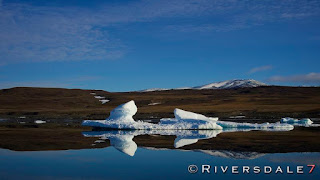 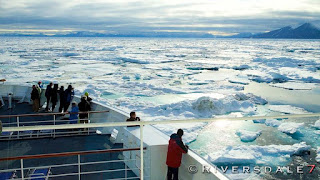 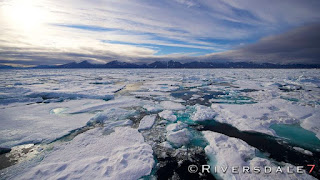 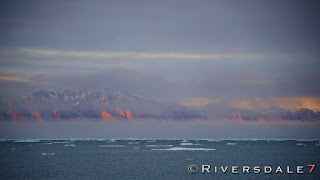 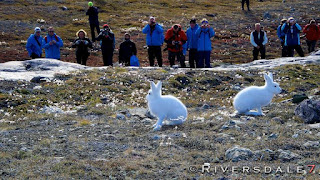 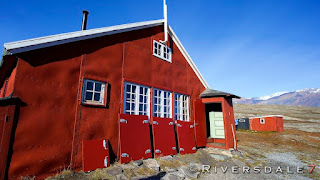 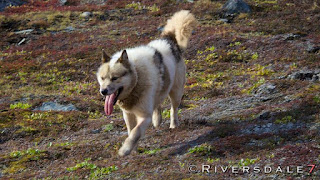 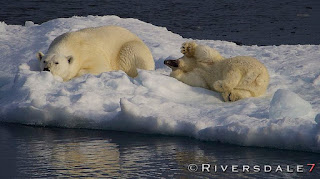 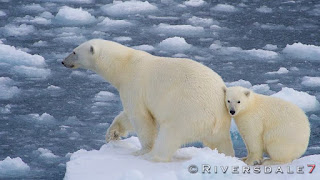 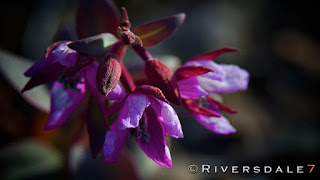 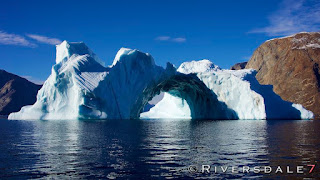 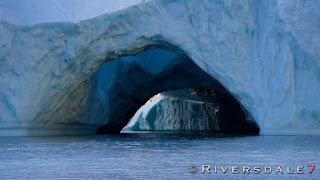 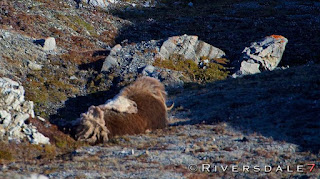