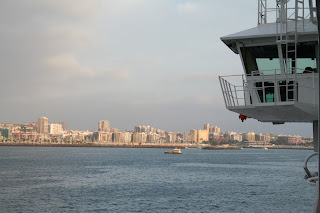 We have land in sight, we have used 17 days from Buenos Aires to Las Palmas. During the morning hours we arrived back to civilisation for a few hours. The Pilot boat arrived approx 0830 and at 0900 we were at pier to commence bunkring. In the early afternoon hours we were back out at sea. A couple of shipshandlers appeared on the pier, well aware of a crew who have not been shopping for almost 3 weeks. A little mini-mall on the pier made a nice diversion for many of the crew.

The evening games in the Group Olympics had its last tow evenings of competetive behaviour across all department borders the 30th and 31st of March.
On the pictures below you can see some of the final games. The first picture shows a game called hepp hepp hello. There are hand movements involved in it and you have to say the opposite of the one before you. The second activity picture shows an impressive effort by the galley team, as they won the game of  5 people dressing, running, undressing in jumpsuit, helmet, big-big-big boots and welding gloves.

The third activity picture shows a really messy game where both contestants are blind-folded and have to feed the opposite sitting person with whipped cream. Funny and messy.
The last activity picture shows an eating contest where the Chef has prepared a lot of things, you are not able to choose what to eat, but you draw two notes where it says what to pick up. 3 from each team participates. As you might see from the picture some of the food was tough to get down.

Email ThisBlogThis!Share to TwitterShare to FacebookShare to Pinterest
Photograph(s) by: Eduardo Valdebenito
Newer Post Older Post Home
Welcome to MV FRAM's Expedition Blog!
MV FRAM is the most modern expedition cruise vessel belonging to the Hurtigruten fleet, roaming polar waters and taking people to remote places where only few go. In order to give you the chance to travel with us, even if only on your computer screen, we have created this blog. Here you can see what we have seen and read what we have done.
And, maybe you will be onboard with us one day!
All About MV FRAM - here
FOLLOW US ON FACEBOOK !