We have had an exceptional crossing of the Drake Passage on our way to Antarctica. Winds remained light almost the whole trip and we were all very thankful of this. The alternative- high winds and high seas- was only in our nightmares! In actual fact the Drake has an undeserved reputation as a very rough stretch of water. It can often be light to moderate, as we experienced. With light winds comes fog on the Drake and we did not see much for the first day. The second day produced a lot of seabirds and some great opportunities to photograph them.

After two days at sea we arrived near land at the South Shetland Islands in the early afternoon, and then sailed down to our first landing at Half Moon Island. We had great light but moderate winds for the landing so it was cold onshore. We were greeted by lots of snow and lots of Chinstrap Penguins on the small island, and also a nice  Weddell Seal. The backdrop of Livingston Island was spectacular!


A few penguins had laid their eggs but most were still waiting for the “white stuff” to melt. These days it is often a long wait as more snow is falling on the Antarctic Peninsula in the winter because of climate change. Although they were waiting, the Chinstraps always looked busy walking to and fro, often with a new, prized stone in their beak for their nest. 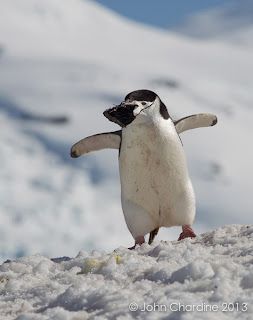 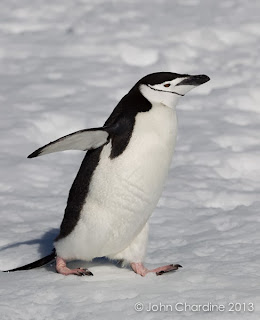 Now that the penguins are laying eggs, the skuas are actively hunting over the colony. However, in the few hours we were on the island we didn’t see a one grab an penguin egg. When most people are introduced to skuas and their feeding habits, there is an automatic dislike because of our affection for penguins. However, we have to remember that skuas have to eat too and that a skua eating a penguin egg is no different to a penguin eating a krill. It's just that we have less feeling for krill than for penguins!

So, we had a great first day in Antarctica and now look forward to more great weather, great experiences, and great photo opportunities as we sail deeper into the last continent.