Two days in South Georgia, that means two days in paradise lie behind us. South Georgia is a little half-moon shaped Island that lies at the periphery of the Antarctic Ocean. As it lies south of the Antarctic convergence it is geographically an Antarctic island; but as the flora and fauna is more or less Sub-Antarctic the biologist call it a Sub-Antarctic island. For us as passengers this discussion among the Geographers, Geologists and Biologists is not so important, for us these days in South Georgia have been only paradise. It looks like that we have lots of angels with us on board as the weather has been so incredible beautiful during our stay on this Island that is also well known as the “Pearl in the Antarctic Ocean”.

We started our first day early in the morning at Fortuna Bay where we visited a large King Penguin colony. There was nearly no wind, the sun was shining out of a clear blue sky; all over the beach we could watch the typical sub-Antarctic wildlife.

Huge Elephant seals with their harem and the very young pups;


Fur seals, only bulls, having a nice sleep under the warm sun, and of course King Penguins on their way to or from their colony at the end of our landing site.

In the colony we watched the young King Penguin Kindergarten. Most chicks have been born in last December or last January. They still wear their wonderful brown coat made out of down. We observed the feeding, the sleeping, the moulting of the adults and we have been inspected especially by the chicks. 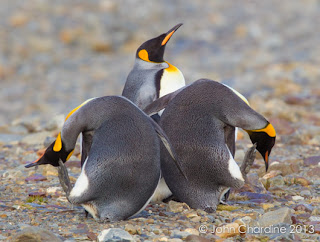 It has been an amazing experience.

Some passengers wanted to stretch their legs and went on a longer hike just over the pass to Strømness. This walk is the so called “Shackleton hike”. The hikers got perhaps a very little impression what kind of strenuous effort Shackleton and his men had to struggle with.

All passengers had the possibility to land in Strømness in the afternoon. We have been happy to see the hikers coming down the steep and snowy slope. We used our hours at the landing site to watch the wildlife and the whaling station. As the weather has been still sunny we could not get enough from all these new impressions.

Those passengers who wanted to get more information about the whaling time went on a PolarCircelBoat cruise to Leith and Husvik. These old whaling stations have been never ever cleaned up. They are totally damaged, but the wildlife started to capture these places back.

Our next morning started very early for our hikers. At 6:30h we dropped them of in Maiviken. From there they wanted to hike over a pass to Grytviken. The hikers started their hike while most of the other passengers were still sleeping.

Around 8:00h FRAM reached the harbour from Grytviken, the first whaling station, founded in 1904 by Captain Carl Anton Larsen.The weather was still glorious, no wind but lots of sun.

After a short lecture about the rat eradication on South Georgia, given by two ladies from the South Georgia Heritage Trust, we went ashore. It was a landing where we got many information and impressions about the history and the wildlife on this unbelievable great island.

Please look at our pictures. Perhaps you will understand that we are more than deep impressed.