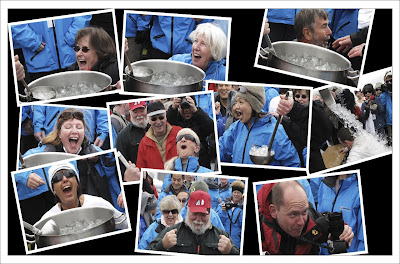 To cross the Antarctic Circle is a very special thing. The number of people that have managed it are measured only in the thousands. Most companies that engage in regular Antarctic tourism offer only one or two trips per year south of the Circle (if they offer it at all). There isn't a large window of opportunity. There are only about six to eight weeks out of every Antarctic summer that ships can reliably make the trip. Any earlier and there is often too much ice. Any later and the weather begins to turn.
In recognition of that milestone we invited King Neptune on board Fram to baptize all of those that crossed the Antarctric Circle for the first time. 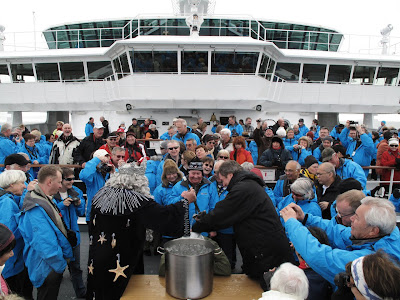 It never ceases to amaze me how eagerly everyone lines up to have ice cold water poured down their neck. Several people were so wrapped up in the spirit of adventure and Aquavit that they were baptized multiple times. The people that come on this trip are for the most part hardy, adventurous, fun-loving souls.
Shortly after 14:00 we landed on Detaille Island, the site of the former British Station W. This base was only opened for three years (1956-59). Remember what I said about 6 to 8 weeks per year when ships can reliably schedule visits to this part of the world? Station W shut down when sea ice and weather made relief by ship impossible. It really has the eerie feeling that everyone left in a hurry. The dishes from their last meal were not done. Long johns hang to dry over the stove. 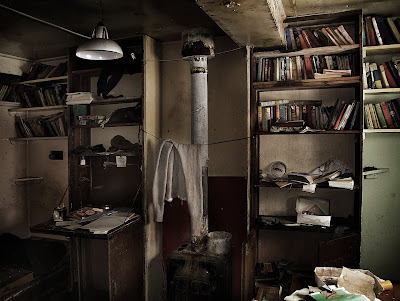 In the early evening around 20:00 we approached the entrance to a very narrow channel called the Gullet. Stunning glaciers form a wall of ice on both sides of the channel. There were hundreds of icebergs and many ghostly white Snow Petrels soaring about. Crabeater seals lazed about on ice floes. It was a very dramatic way to end our first day south of the Circle

Email ThisBlogThis!Share to TwitterShare to FacebookShare to Pinterest
Photograph(s) by: A. Wenzel
Newer Post Older Post Home
Welcome to MV FRAM's Expedition Blog!
MV FRAM is the most modern expedition cruise vessel belonging to the Hurtigruten fleet, roaming polar waters and taking people to remote places where only few go. In order to give you the chance to travel with us, even if only on your computer screen, we have created this blog. Here you can see what we have seen and read what we have done.
And, maybe you will be onboard with us one day!
All About MV FRAM - here
FOLLOW US ON FACEBOOK !