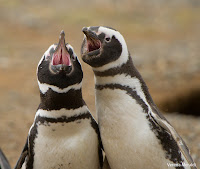 No we are not talking about colonial countries of the past, but seabird colonies of today. And the bloggers, who are both biologists and passionate about seabirds, make no apology today for writing a blog about birds!! 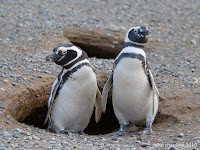 Very early this morning, the Fram repositioned from Punta Arenas to Magdalena Island about 22 nm to the northeast. Magdalena is a small lump of very soft sandstone in the Strait of Magellan, and has been designated a national nature reserve because of its importance as a penguin breeding site. The reserve is managed by the Chilean government agency Corporación Nacional Forestalis.

About 100,000 pairs of Magellanic Penguins currently nest on the island, making it one of the largest and most important penguin colonies in Chile, if not South America. Sites like this rely heavily on protection for their future and the government of Chile is doing a wonderful job. Visitation is strictly controlled and we were fortunate to receive last-minute permission to land.

Mid-morning we returned to the ship with smiles on our faces testifying that we had witnessed such an amazing spectacle. Through the morning we continued to cruise the Chilean fiords and attended lectures on a variety of relevant topics. We had periods of glorius sunshine in the fjords, which is unusual as the wet westerly winds from the Pacific Ocean dump over 3000 mm of rain per year on this territory. Later we approached Tucker Island to observe the breeding birds there and, remarkably, were able to identify several from a distance including Rock and King Cormorant, Ashy-headed Geese, Magellanic Penguins, many Chilean Skuas, and even Chilean Swallows.

Our next highlight for the day was a transit of the narrow Gabriel Channel. To each side of us towered tree-clad hills and snow-capped peaks. Water streamed down the mountainsides every other meter until it plunged into the fjord. And with all this, we saw few signs of human habitation or indeed any human effect (a small fishing boat was seen!). We think that the word "pristine" was made for this place.