Yesterday was an amazing and interesting day at the same time. "May you live in interesting times" goes the proverb and we sure have done that. In the morning, we made what only can be described as an idyllic landing at Cuverville Island. Cuverville is home to a large colony of Gentoo Penguins. As we landed we were confronted with a think wall of snow from last winter. The penguins had breached the wall in a couple of places, which allowed them to clamber up on to the colony. We made steps up the snow wall for our passengers- no doubt these steps are now being used by the penguins.

The morning landing was sunny, warm, and calm- real shirt-sleeve weather. The penguins were only very early in their breeding cycle because of the snow. No eggs or constructed nests were seen. On the way back to the ship we cruised around the amazing and sometimes colourful icebergs that were in the bay. 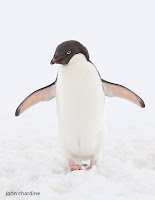 The reason we are late posting this blog is our landing at Neko Harbour, which was quite a bit longer than we expected. Neko is on the true mainland of west Antarctica and some feel they have not been to Antarctica unless they have stepped on the continent. Heavy pack ice filled Andvord Bay, at the bottom of which is Neko, so the Fram slowly sailed in to find an anchor from which we would launch the Polar Cirkel boats. It was clear from our first ride into the beach that the trip would be a relatively long one. The Polar Cirkel boats had to pick their way through the pack, which was relatively easy at first but got worse through the middle of the landing.

On the way to the beach we were lucky to see some Crabeater Seals on ice floes. The landing went well with people enjoying the Gentoos, Snowy Sheathbills, and other wildlife, and hiking up the hill behind the beach, only to slide down the same way. Although this was a Gentoo colony, a lone Adélie Penguin came on shore for a preen. The result of the pack ice was that our landing lasted about 7 hours! The last four boats returned to the ship at about 22:30, and followed the Fram into open water so that the remaining passengers and staff could board her. All went well and although, tired and a little cold, everyone felt that they had experienced a true Antarctic adventure.