The table is set

Overnight we sailed from the relatively ice-free waters of the western side of the Antarctic Peninsula north and through the Antarctic Sound. Quickly we started to notice the large icebergs ahead of us, many of which were tabular (= like tables) in nature. Then we started sailing by iceberg after iceberg, all of which were spectacular in different ways.

Some were the temporary home to small numbers penguins roosting in often impossible places. Tabular icebergs have smooth, flat tops and are chunks of ice shelf that have broken off. Ice shelves are portions of the Antarctic icecap that flow down into a bay and float on the sea while being supported by land on each side. Climate change and warming on the Antarctic Peninsula has caused several portions of ice shelves to break off catastrophically, producing icebergs so large that they are given unique names (numbers and letters) and called "ice islands".

Later in the day we arrived at Brown Bluff which was to be our landing site for the day. Brown Bluff is part of the mainland of west Antarctica and lies  on the Tabarin Peninsula. The ash-tuff cliffs with embedded volcanic "bombs" rise up behind the beach and tell the story that this is a volcano. The site is home to nesting Snow and Cape Petrels, Gentoo and Adélie Penguins, and Kelp Gulls.

This was the first large Adélie Penguin colony we had visited on our expedition and it did not disappoint! Large numbers of Adélie Penguins had already laid their two eggs and were comfortably sitting on them. The beach slopes towards the sun and loses its winter covering of snow early. Penguin like this because they can start breeding early and be finished before winter arrives. 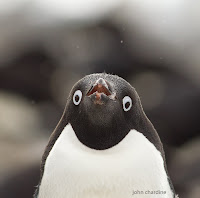 We noticed quite a few broken penguin eggs on the beach, a sign of active skua predation. Huge coloured boulders encrusted with lichens were strewn around here and there, and had clearly broken off the high cliffs above.

After our landing we sailed back through the Antarctic Sound and again had great views of several spectacular tabular icebergs.