A day in a southern city

Punta Arenas- what a place! We arrived to this the most southerly large city in the world last night. There are so many layers in this city and surroundings: history, culture, architecture, economy, people, wildlife, and we experienced all of it today.

This was excursion day for us on board the Fram. Groups went on city tours, to an estancia (sheep station), to a Magellanic Penguin colony, and on a hike in southern beech forest. Others simply walked into town and enjoyed this place. Even though it was Sunday, many shops and cafes opened later in the morning. 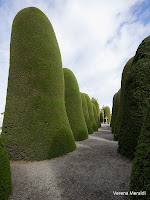 At the Estancia Olga Teresa, folks experienced sheep sheering, Chilean rodeo (the second most popular sport in Chile next to football), and an authentic sheep BBQ, A.K.A. cordero asado de Patagonia. In this famous culinary delight, lamb is cooked over wood fire.

The hike started out a bit slow but once the details had been cleared up, we had a beautiful walk through a green terrain with snow patches and magic trees full of green moss, lichens and ferns. We came out of the forest on a narrow trail, and experienced an open terrain with a beautiful view over the area, the city of Punta Arenas, and the strait of Magellan. Later the wind picked up and we experienced horizontal sleet and snow, creating a great setting and the end of the hike. As one passenger said it, "this is what we came for...!

The Punta Arenas city tour took people on an round trip which included a visit to the local museum which is mainly focused on the natural history of this area of Patagonia. The work of the missionaries that studied the local Fuegian populations, such as the salesian priest Father Augustini, is also highlighted. Augustini produced a unique photographic and cinematographic records of these ethnic populations. 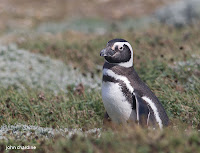 The next stop was at the very interesting graveyard where most of Punta Arenas' history can be followed as you walk through the mausoleums and read the inscriptions. The tour ended at the main "plaza", where the weekly military exercise was taking place. They played music and accompanied the students of Punta Arenas' schools on a walk around the monument to Ferdinand Magellanes.

The visit to the Seno Otway Magellanic Penguin colony involved a 1+ hour bus ride over dry patagonian pampa. During the trip we were able to spot several fascinating wildlife species including a local skunk who had absolutely no interest in us as he dug for food in the soil. There were a few adult penguins making their way from the burrows to the sea and vice versa, and a larger group of younger penguins hanging around on the beach, waiting to moult.

At the end of the day, all of us moved to deck 7 to watch a wonderful Chilean Folklore show. The performers were accomplished musicians and dancers all of them very young. It was really good to see that these traditions are being maintained and celebrated by young Chileans.

I think we could say, we had a full day!!