Against all odds: the Fram conquered the ice 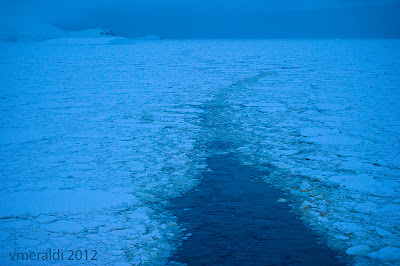 Late last night the Fram sailed through a dense one year pack ice field. It was impressive! She smoothly made her way through the ice, which would close immediately after her passage. To add to the atmosphere, it started snowing, we felt like explorers onboard an icebreaker on our way to an extremely remote place in the middle of the winter. This ice crossing allowed us to reach Petermann Island for our morning landing. 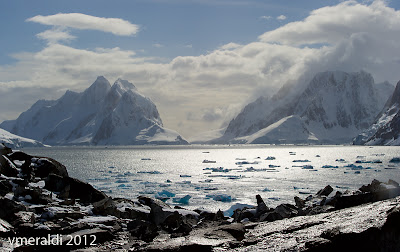 This Island was discovered by the german sealer Eduard Dallamann during his 1873-1874 expedition, he named it for the german geographer August Petermann. The island is also known for having sheltered the french explorer Jean-Baptiste Charcot and his crew after their ship, the Pourquoi pas? ran aground not far from there.


We were welcomed by a “mini” blizzard; snow and wind blowing from the north made it almost impossible to see further than a few meters away. But very quickly the time changed, the clouds continued passing but gave way to a sunny day, creating nice shadows and nuances on the landscape.

Regarding wildlife, this island offers a great variety of species. We saw Gentoo and Adelie Penguins, Blue-eyed Shags, Skuas, Terns, Giant Petrels and Kelp Gulls. This is the southern most Gentoo Penguin breeding colony, and ironically, chicks here (65°10’S) were more advanced than on Cuverville Island (64°41’S).

Several Adelie Penguin chicks had already fledged and were ready to start an ocean life. Iceberg alley is on the south-west shore of the island, we had the chance to see one iceberg breaking up and turning in the search for a new floating equilibrium.

During lunch time we sailed through the very narrow Lemaire Channel. This 11 km long and 1.6 km wide passage was also discovered during the 1873-1874 german expedition, but it was named by Adrien de Gerlache during the belgian expedition in 1898 for the Congo explorer Charles Lemaire.

The crossing of this channel by good weather is one of the highlights of an Antarctic Trip. We confirmed that with a Polar Cirkel boat cruising after lunch. The ice floes around the vessel had extremely beautiful shapes and colors, and on many of them we could find Weddell Seals, Crabeater Seals and Leopard Seals resting. This was, once again, a wonderful day down south.