Closing in... on the Drake 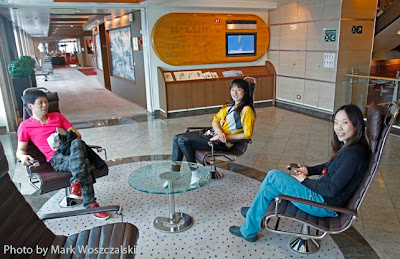 After a trip full of activities it was nice to have a relaxing day onboard again. The Captain invited us to visit the bridge in the morning. After watching the Captain navigating through narrow straits and pushing ice we of course had questions about how this was all possible. He explained how easily the Fram is operated and that she has the ice class B1 and propulsion A1, which means that we have a stronger hull. He also explained how its stabilators reduce the rolling up to 70%. This is certainly much appreciated by some of us who can’t help feeling seasick! The lucky ones who didn't feel the affects of the waves enjoyed the good food in the buffet. 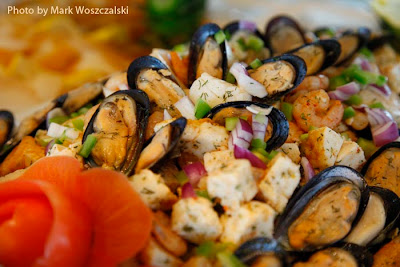 The wave intensity has been slowly rising as we make our way to Ushuaia: we have learned that there is a low pressure approaching, which means we could have a bumpy ride ahead... Read the blog tomorrow and you will find out how it went! But after such an extraordinarily calm trip, it’s about time we experience some bad weather in the stormiest of all the oceans. That would be the perfect closure for an Antarctica Trip. 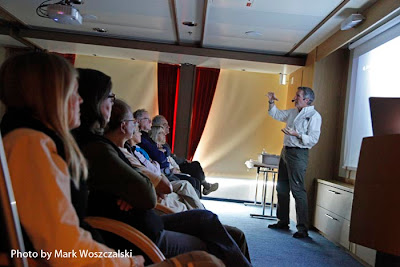 As usual, several lectures were offered throughout the day. We still haven’t lost the urge to learn about Antarctica, its creatures and adventures. We are also starting to prepare our departure, at least mentally. We had time to start sorting the hundreds of breathtaking photos we have made during our expedition trip and we also had the opportunity to discover the work of our ship's photographer Mark, in a video which was shown all day long. After the lectures we watched a movie about Shackleton’s Endurance expedition in 1914, during which they were locked up in the pack ice for several months before loosing their vessel, and how they heroically made their way to South Georgia on a small open boat, the James Caird, in order to rescue the rest of the crew left behind on Elephant Island.

Like always during the passage, many seabirds like the Wandering Albatross, the Souther Giant Petrel, the Wilson's Storm Petrel and others, were flying around the ship providing a spectacle for the passengers and a challenge for the photographers onboard.