Rain was falling as we boarded the Polar Cirkle boats to go to Port Lockroy this morning at 09:30.  But what’s a little rain to adventurous Antarctic explorers such as ourselves?  This drizzle would not dampen our spirits, it would not stop us from seeing the most visited site in all of Antarctica and it would most definitely not prevent us from shopping at the most well supplied gift shop in all of Antarctica. 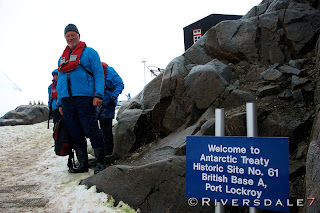 Port Lockroy is the site of a former British Base and has been restored as a small  but excellent museum. The income from the well-supplied gift shop goes to the British Antarctic Heritage Trust and amongst other things helps to maintain the museum.

The Expedition Team helped us up a wet slippery slope where we were greeted by a large number of penguins.  Gentoo Penguins nest all around the museum, gift shop and living quarters of the few people that inhabit Port Lockroy in the summer.   Needless to say, they are very used to people wandering around.  Gentoos seemed to be everywhere.  They nest within a metre of the entrance to the museum and penguins constantly wander about.  According to IAATO regulations we must not approach penguins closer than 5 metres.  However the Lockroy penguins brazenly broke this rule at every opportunity.  How wonderful! 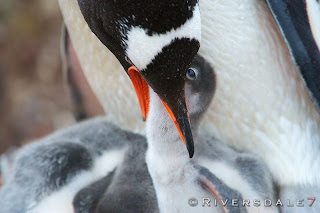 After lunch, we once again landed on the actual continent of Antarctica at Neko Harbour.  Neko is the site of another Gentoo colony and there were many penguins preening themselves on the beach.  A short walk took us up from the beach and to the base of the colony.  We had the option of hiking up a snow and ice field to a lofty lookout point where we had excellent views of Neko Harbour and the the glacier front.

One of the fun things when hiking in Antarctica is that sometimes there is an option to slide down the hill that you hiked up.  It seemed that most people chose the sliding option!  The Expedition Team selected an appropriate area for sliding and soon people were zipping down the hill.  Ski-bunda!

By 19:30 the last Polar Cirkel boat had left shore and we were once again heading further north.  As we were exiting Andvord Bay we sighted three Humpback Whales and were able to observe them near the ship for over forty minutes! 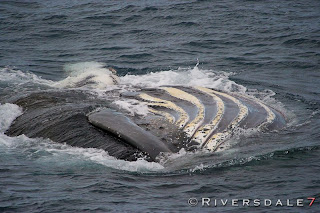 At 22:00 we joined our Philipino crew in the Observation lounge where they entertained us with singing and dancing.  It was a delightful way to end our day.