Ushuaia in the sun!

It was a heat wave in Ushuaia.  Shorts and a t-shirt were de rigueur.  Most often when warm air wafts through Ushuaia there is a sense that inclement weather lies lurking just beyond the craggy mountain tops.  But not today.  There were no fewer than eight ships in Ushuaia today.  The port was packed and everyone was strolling the main streets luxuriating in the warm sunshine.  And why not?  Let’s absorb those beneficial rays before heading down to the ice.  It’s going to be cold right? Well, maybe.  Certainly colder than Ushuaia was today but this is the warmest season I’ve seen on the Antarctic Peninsula in the past twenty years.  Is it global warming?  Possibly.  Is it natural weather  variation?  Probably.  But it gives one pause for thought. 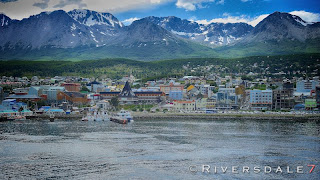 The weather has also been kind to us crossing Drake Passage this summer.  The majority of our crossings have been accompanied by very little wind.   Having said that, several ships got slammed three days ago in a big storm in the Scotia Sea.  There is also much more ice further north in the Weddell and Scotia Seas this year and in addition there has been more fresh snow on the northeast side of the peninsula than normal.  What gives?  I don’t know, but for the most part the weather has been to our benefit.  The ice? Well, there was that massive detour we had to make on our trip from South Georgia to the Peninsula.  The northern boundary of the ice caused us to deviate our course by hundreds of miles.
These days we conduct our mandatory safety briefing before we leave the pier in Ushuaia.  Upon completion of the drill we cast off at 18:00.  There was a stiff breeze blowing but nothing that would ruffle Fram’s feathers.  It was a glorious evening to cruise the Beagle Channel.  At 21:00 we joined the Captain, the officers, the Expedition Team and some of the crew for the Captain’s welcome speech and a glass of champagne.  We were introduced to key members of the ship. 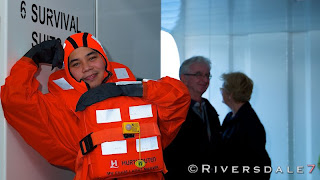 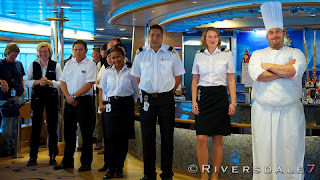 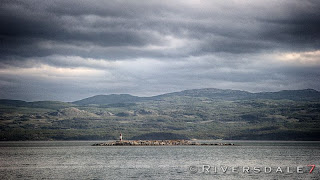 At around 23:00 we went from the sheltered confines of the Beagle to the rolling swell of the open Atlantic Ocean.  You can always tell.  The ship goes from little to no movement  at all, to a gentle roll like tonight, or to a “bounce and slam” on some other nights.