Early this morning MS Fram sailed towards the distinct landmark Alkhornet which leads in to Isfjorden. We couldn't let a mountain like that go to waste so of course we had to go on shore. Alkhornet is a part of the long bay called Trygghamna. Trygghamna means «safe harbour» and indeed it is, with all its tall mountains surrounding it and keeping it sheltered from the weather. After several days of sun we are starting to get quite spoiled, but I won't forget to mention it in this post as well. We had amazing weather today as well, and that is something that you don't get served on a silver platter on Svalbard.

Some of the guests chose to experience Trygghamna by kayaking along the shore deeper in to the bay. Some tried kayaking for the first time and after an educational trip to the lunchspot the guide had a surprise that he had been talking about. Then he brings out some good norwegian chocolate, that is all good, but was that really the surprise?  Suddenly he takes up an accordion and starts playing songs from all the countries which were represented in the kayak group. What a guide!
The others enjoyed a nice walk under Alkhornet. With its steep mountainsides, it houses a massive amount of birds and when you are standing under it you see them all flying back and forth over your head. And where there are birds there is bird poop, and where there is bird poop there is fertile soil, and where there is fertile soil there is a lot of flowers and vegetation which attracts the reindeers. During the walk you could see several reindeers walking around and eating, totally unaffected by our presence. 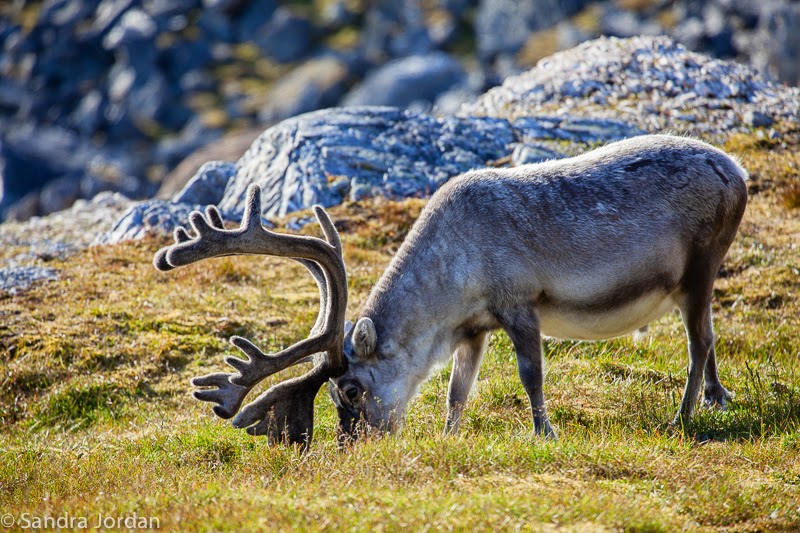 This trip has gone by so quickly because suddenly we were in the lounge listening to the Captain and the crew saying good bye to us. Has this been a dream? Somebody pinch my arm because this feels so unreal. A part of going on an expediton cruise is the excitement.You don't know what kind of weather you will get or what you will see. Svalbard is not a zoo or a museum, and that's  the beauty of Svalbard. You can see the cultural remains in their original place and really get a feeling of how they lived up here in the earlier days.  Mother nature is the boss up here and seeing how she has shaped the landscape and how the nature with its animals and birds are in balance gives you a greater understanding and connection to nature and the Arctic that is difficult to explain. This has truly been the voyage of a lifetime and you don't know what you are missing out on unless you go there yourself!

Email ThisBlogThis!Share to TwitterShare to FacebookShare to Pinterest
Photograph(s) by: Sandra Jordan
Newer Post Older Post Home
Welcome to MV FRAM's Expedition Blog!
MV FRAM is the most modern expedition cruise vessel belonging to the Hurtigruten fleet, roaming polar waters and taking people to remote places where only few go. In order to give you the chance to travel with us, even if only on your computer screen, we have created this blog. Here you can see what we have seen and read what we have done.
And, maybe you will be onboard with us one day!
All About MV FRAM - here
FOLLOW US ON FACEBOOK !