We are back in the Antarctic again! The crossing of the Drake Passage, which can be quite dreadful in bad weather, was a pure “Drake Lake”, with only minor waves. The first island and land to spot was the famous Elephant Island, the north-eastern most of the South Shetland Islands. It was here that 22 men of Sir Ernest Shackleton’s ‘The Imperial Trans-Antarctic Expedition’ had to spend 4.5 months. The expedition never reached the continent of Antarctica. Their ship, the Endurance, got stuck in the sea ice of the Weddel Sea and was crushed. After a long journey on the sea ice, and later open sea, the hauled their life boats ashore Elephant Island. In their strongest life boat, Shackleton and two of his strongest men sailed to South Georgia, while the remaining men lived under the two remaining life boats, hoping that their expedition leader would return. 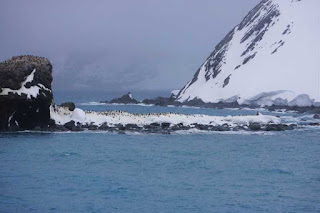 Relatively good weather conditions allowed the Fram to visit ‘Point Wild’ and see the place where Shackleton’s men lived for ourselves, although the swells were too big to go ashore.

After we had sailed around Elephant Island, we found calmer waters. At Point Lookout, it turned out to be a fantastic evening. We made a cruise under illuminating lenticular clouds, while enjoying the glaciers, ice bergs and first penguins of the trip. A marvellous start! 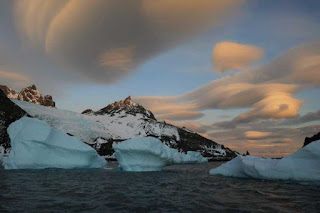