We had a very interesting day today. The morning was a little different in that instead of a landing we planned a small-boat cruise around the icebergs in Pleneau Bay. The bay is quite shallow and the bergs that float into it become grounded- hence "iceberg graveyard". But of course we cannot forget that to get to Pleneau Bay we had to navigate through the amazing Lemaire Channel. We did this successfully as there was little ice to impede us. 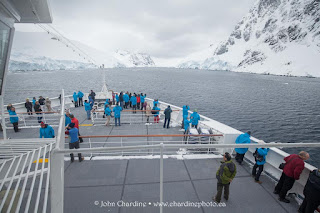 Pleneau held icebergs of every shape and size. Some were magically blue- caused by the selective absorption by water molecules in the ice, of the red, orange and yellow light, leaving the greens and blues behind. A lone Adelie Penguin was spending a nice morning on one of icebergs! 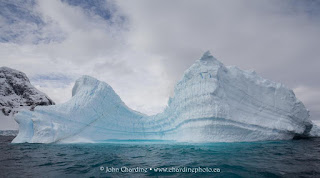 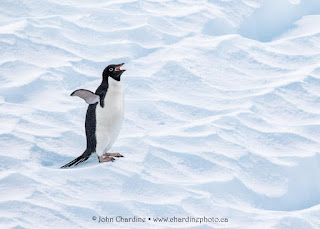 Back on the Fram we sailed down the Penola Strait to Petermann Island, under beautiful sun and clam conditions. The expedition team landed and set up shop but it soon became clear that a massive amount of pack ice sitting in the strait to the south was moving slowly towards us, blocking the landing site. 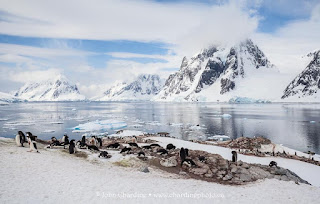 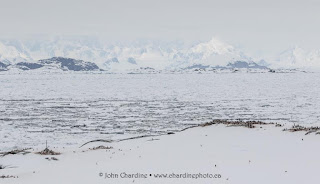 Wisely, we aborted the landed and went to "plan B", which was back to Pleneau Bay and onto the Pleneau Island. By the time we got up there, the weather had dramatically changed to what we were used to for the cruise- wind and snow! Despite this we made a wonderful landing there- a true Antarctic experience! A very inquisitive Gentoo inspect Nick's Canon camera. Penguins clearly like Canon better than Nikon! 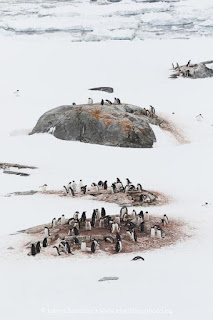 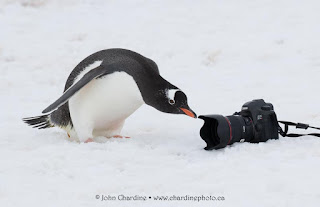 To top it off, our campers set up on nearby Hovgaard Island and had a wonderful night there.