The Soul of the East 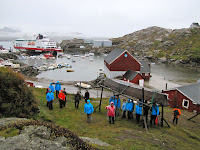 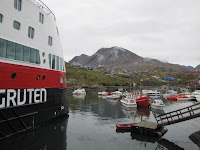 There are several things to be seen in this harbour picture from Tasiilaq. First: how very, very tiny the pier is captain Hansen managed to reverse-park FRAM. Considering that she is only modestly sized, she still looks among the tiny fishing boats like a fat alley cat sitting in a group of mice. But this morning it is sheer bliss not to have to use the tender boats - rain is pouring down on the 1900-people village, the largest on the east coast, for two weeks in a row now. And this is a weird thing, says Jan, our guide for the day and cousin of our team member Janus (who is actually born in this place), since normally it should be around freezing point and rather snowing. 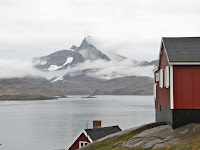 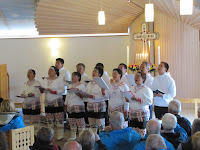 It could have been a city walk like many others, new church here, museum there, and here's the souvenir shop. But Jan builds a stunning bridge between past and present with only a few side informations: His great-grandfather was a friend of the immensely famous Knud Rasmussen, who - among many other things - created the wonderful movie "Palo's Wedding", which we watched just two days ago and that left an impression of times so infinitely long gone that it could as well be medieval or stone age, no matter. But the great-grandfather was in fact one of the actors, too. Just three generations away, no more. Suddenly the past gets tangible, knocks on the door of today. Did you know that this movie was not - as we all thought - a silent movie? It's only that the soundtrack got damaged and lost during a storm when the actual movie material, good old celluloid, was transported to Denmark. The sound that is to be heard today is a later recording of Jan's granny and one of her friends who were invited to Denmark by Rasmussen in order to do so. 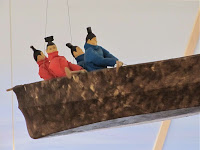 Musing this surprise we enter the church, where the choir of Tassalik is gathered to present us some songs.
There are quite many choirs all over Greenland, in a lot of places. But the sound suddenly filling the nicely decorated, candle-lit church is not random, not debutant, not coarse. It is the most wonderful music we have ever heard in Greenland, a capturing blend of psalter, gospel and traditional song, delivered with unexpected accuracy and a spirit that is intensely touching. The applause doesn't want to cease. 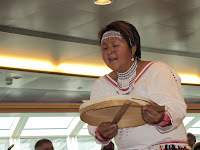 It is a great pleasure for us to welcome the singers a little later on FRAM; on account of the rain we simply put the next attraction indoors, or rather in-ships: The drum dances. Again, what we see here is beyond all other performances, joyful, intense, charismatic and colorful. A day to remember! We regret to have to leave.