Not many on the earth have visited Turret Point, on the extreme eastern end of King George Island, South Shetlands, Antarctica. We were the lucky ones today. We steamed up through the Antarctic Sound and crossed the Bransfield Strait overnight, and were placed off Turret Point and Penguin Island in the early morning. These were to be our two landing sites for the day.

Turret Point is named for its high rock stacks which are actually volcanic plugs. These are formed when molten magma hardens in a volcanic vent. The rock, so formed, is harder than its surroundings, which erode away leaving the plug behind. "Turret" is a very rich, Antarctic oasis. Antarctic hairgrass, terrestrial algae, mosses and lichens abound, their growth promoted by relatively warm conditions (for Antarctica!), and adequate supplies of moisture and nutrients. Animals abound as well.

Elephant Seals were hauled out at several locations- young males play-fought as practise for future, more serious encounters when they grow up. We also noticed their yaps, barks, snorts, and growls as the wallowed together in small groups. Adélie and Chinstrap Penguins were seen in a few places, as were Blue-eyed Shags, Antarctic Terns, Wilson's Storm-Petrels, and Kelp Gulls. 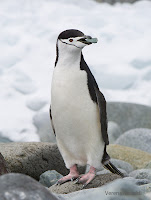 The highlight of the fauna for many was the breeding Southern Giant Petrels. Despite their aggressive, scavenging habits, they are actually quite sensitive to disturbance at the nest so we maintained our distance (50m).

Our plan was to return to the ship, have lunch and come back out to the adjacent Penguin Island but Zeus had other plans.

We could see the weather deteriorating quickly, and by the time we were due to land, the wind had picked up significantly, as did the sea-swells. This forced the cancelation of our last landing of the voyage. However, Turret was still fresh in our minds and eased the disappointment as we lifted anchor and headed north into the Drake.