From Sea to City 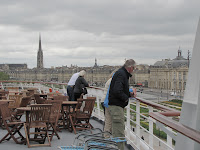 Early in the morning we take the pilot on board who is going to bring us safely upstream. This seems a little odd, since La Gironde is a wide open water, very much unlike a river. And in fact, it is what we call an estuary, a tide-controlled bay that ends in a river. The tidal range is a considerable 4,5 m, creating strong currents all along the stream. And finally the Gironde narrows down, making the navigation much less obvious than in the beginning. Two hours later, after passing the confluence with the Dordogne we get the feeling of riding a bus on a narrow road. When the houses and cathedrals of Bordeaux appear round the next bend it feels like driving right into the heart of the city.

Actually, into the red heart of France: The most precious wines of the world are made on both sides of the river. On the souther, muddy bank we find grapes like Margaux, Médoc, Graves, and Sauternes, wheras the limestone on the northern side yields the famous St. Emilion, Pomerol, and Fronsac. This is also where the day's excursion leads to, the incredibly scenic and hilly village of St. Emilion, departure point for a faszinating tour into the limestone caves that build the foundation for the world famous grapes. It is a special moment to half crawl through the tunnels in the mountain, only to emerge into the steep-walled underground church! 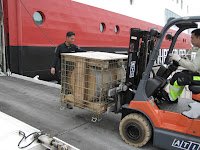 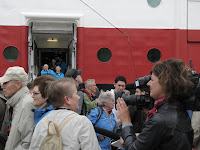 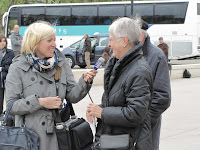 Meanwhile FRAM deals with the journalists, city officials, travel agents and port guests who come to see us. Also she takes in all the necessary replacements in food that we need for the next stretch. As a very special delivery we receive the huge cask that we left here last time. Remember the story with the FRAM cognac? It is distilled now and ready to be bottled, after being brewed with waters from both polar circles and being transported twice around the world. Quite some V.S.O.P, this is! 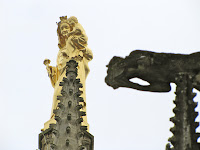 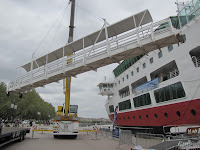 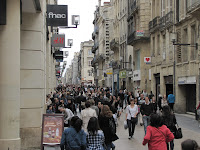 Taking a walk in Bordeaux is a lively thing, the roads are crammed with people shopping, going out for a coffee or wine, visiting good bookshops or - just like us - marvelling at the old and weathered sandstone cathedrals and churches, with their numerous ornaments and gargoyles. It is a place where you want to spend a month and a half only to test all the different bistros and brasseries and restaurants. Unfortunately we will have to get back in time before the city-owned gangway (tides!) is lifted again. But then again, we are heading for the Channel Islands now, who is possibly going to complain…??