Of Pilgrims and Seafarers

Quite many of us actually did not witness the first landing of the day: At 7am we dropped a  sizable part of our guests in Villagarcia, Spain, to take part in a whole-day land operation which led to the very famous pilgrimage site of Santiago de Compostela, a hallmark of the European Catholicism. As crowded as it might be, there is a faszination to this sacred place that people find near impossible to ignore. That's on a normal day. Imagine our surprise to bump into the ceremoniy for the inauguration of the 800-year celebrations… Many more people there, all completely exited, especially when they did the "Abraza a sua Catedral", the group hugging of the famous cathedral. That was worth the long walk, indeed!

In the meantime, the others took it much more easy today, getting up just in time to catch breakfast while enjoying the scenic passage out of Villagarcia with hundreds and hundreds of slim, elegant boats that are tied up in the bay for the sake of clam cultivation, like a ceremonial defilée to honour MS FRAM on her way out. 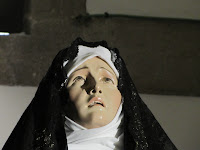 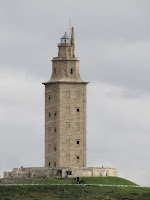 On a calm ocean things went just veeeeery relaxed, attending some briefings and lectures that were picked suitably for the Portuguese/Spanish surroundings: History of Portuguese seafarers, Principles of Navigation, applied first by the aforementioned navigators, and Spanish art. Cap Finisterre lay far off in the distance; Spanish authorities did not allow us to pass close enough to take a peek. Inshallah. Only a little later, as it seemed, the landmark of the north-western tip of Spain appeared: The characteristic silhouette of the Hercules Tower, pointing skywards like a menacing finger. Only that this is no threat, but the worlds oldest lighthouse, commissioned by the Roman emperor Trajan and continously operated since almost 2000 years. It marks the entrance to La Coruña, friendly harbour town with beautiful architecture and uniquely glazed houses. 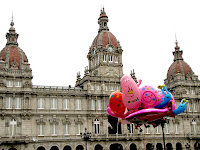 While the "pilgrims" stormed on board to have dinner, the other party strolled to town to enjoy another mild evening in this small, but charming and vibrant place. 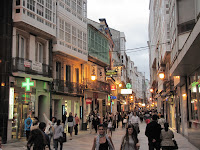 So everybody got his share and will certainly have a good nights sleep and be up and ready for our first full sea day.