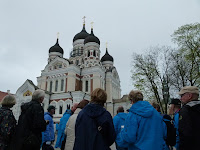 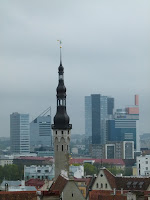 The next morning is a foggy one, nothing in sight, no contours, no land, no nada. So maybe it's a good time to start packing, or at least pre-arranging. The forecast says we will have better view later on, but who really relies in forecasts...? 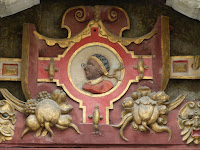 One hour before we reach Tallinn the pilot boards us and shows us into on of the Baltics busiest ports, many bigger ships and ferries departing every hour, criss-crossing the flat calm ocean, connecting all the beautiful cities we have seen, but also many other places like Riga, Gdansk. 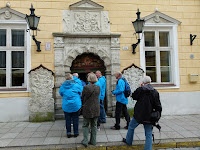 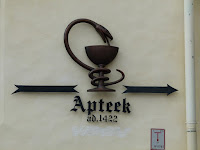 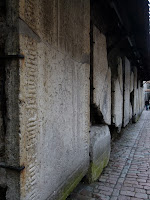 Today we are in for a real treat. Ever heard of Reval? That was Tallinn's name for many a century, meaning the "place where the deer (Reh) are falling", a very popular hunting ground. Reaching as far back as the 11th century, it did not only change name, but even more often rulers. From the Danish that went there first in order to christianize, the Hanseatic League, who made the place prosper and so a very desirable town, to the Swedish who were supposed to grant protection against Russia, to the Russians (who overcame the Swedish), Germans during several wars, Sowjet Union - and finally independence. 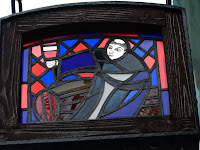 And the most amazing part: The unbelievably well-preserved medieval town centre remain practically undamaged throughout all this. So if you enter Old Tallinn through one of the stony gates you take a leap back in time, round turrets looming above, fortress walls and merchant buildings with hooks in for hoisting goods and weapons, cobble stone pavements that have seen hooves, cart wheels and handmade leather boots, wooden doors bent under the weight of centuries, thick oakwood doors, studded with iron spikes, telling the tale of unpleasant neighborhoods. 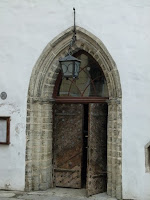 Today, of course, there is tourism, but in a nice way, people are dressing up in historical clothes, speaking an old version of English when they serve you a soup made after a medieval recipe.
Instruments from the past are masterly played and the overall atmosphere is refreshingly ancient. Here, that is, inside the walls. 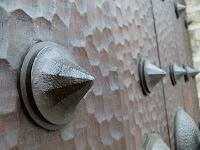 Out "there" there is a modern country growing, with a keen, ever-learning population, advancing to Europe's spearhead in the IT business and technology, just to name two. Amber is a main sales hit, too, you see it literally everywhere.

But none of it during the excursions in the old parts of Reval/Tallinn, be it by bike or on foot. We breathe the air of knights and templars for a day, of swords and spells, of spices and lutes. 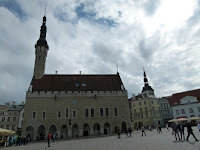 It is a little unreal to go back to the ship, to the modern world. But our Captain is giving his Farewell Cocktail in the panorama lounge, and nobody wants to miss it.
So we are ready for our last leg that leads us to Stockholm, capital of the last country on our multinational trip.