After the tumultous night...

Yesterday we had seen the weather forecast that a weak low pressure system would be positioned in front of us in the Drake Passage as we sailed north. Once we reached it, however, we realized how strong the system was. In the late evening the Fram started plowing into the oncoming waves and the movement inside could be felt by all of us as we tried to get some sleep. The ship pitched up and down and rolled through the night with a peak at about 2am, with hurricane force winds and waves as high as 15m or almost 50ft. Despite this, the good ship Fram weathered the storm very well and only a few glasses were broken! Many feel that it was important to experience the Drake Passage in this, its characteristically fierce form, and to really understand why the Southern Oceans have such a reputation. By the way, no image can convey the angry, indiscriminate look of the sea on days like this.

Regardless of the short sleep, our lectures and slide shows were attended by many of our fatigued but happy passengers. After the supper we sighted the first land of this great South American Continent, although we were too far away to see the famous Cape Horn. As this is the last night on the ship, we have the sad task of packing suitcases in preparation for returning home tomorrow.

And finally, a word about our Expedition Team on board. We work 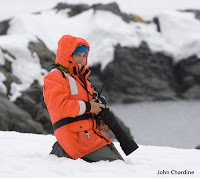 long hours in incredible places and hugely enjoy our jobs. We quickly get to know each other as family. After a few cruises under our belts it is now time for some to leave the ship for another year and return home. Tomorrow we will say goodbye to Petra, Verena and Rudolf. Those who are staying will miss them, softened only by thoughts of reuniting next year in this most special part of the world. Verena is one of the writers of this blog and you know her through her words and pictures. Hasta pronto to all.