Deception and Half Moon

We experienced fantastic weather today with very little wind and bright conditions. Deception Island was spectacular. We walked the chocolate-brown sand beach, hiked up the hill behind the hanger, investigated the remains of the old Norwegian whaling station and British Base B buildings, and watched at 100s of Cape Petrels fed on amphipods along the shoreline of Whalers Bay. Antarctic Terns and Kelp Gulls were nesting

in a few places, and skuas, many ringed, were seen bathing behind the whaling station. To top this all off, the tide was very low during our landing, which allowed the hot springs from the volcano to flow down the beach and mix with the 0° water in the bay. This was welcomed by the many Antarctic swimmers we had today, who braved the waters for a quick dip.

After a 3h reposition we found ourselves at Half Moon Island. 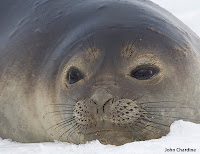 Weather conditions were perfect for landing (unlike a few days ago as we came south) and we found the local inhabitants- the Chinstrap Penguins- to be rapidly filling each nest with 2 greenish-white eggs. On the landing beach were greeting by a young Elephant Seal and two Weddell Seals. As the sun faded in the early evening the Wilson's Storm-Petrels started to leave their burrows and fly around the island.