After a bumpy night, we awoke to a rather tempestous morning in the Drake Passage. Oddly, despite the high winds, not many birds were flying around Fram. This, plus the fact that the outside of the ship was cold and very damp meant that not many people ventured out in the morning.

Luckily, around noon the sea calmed down a lot and the sun started shining through the clouds. With sunshine came fabulous 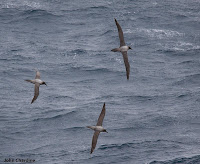 seabirds! We were first treated to flocks of agile Cape petrels and erratic prions, difficult to photograph because of their incredibly rapid flight pattern, just inches above the water.

Later came a majestic southern giant petrel, that circled the back of the ship so close, that John Chardine managed to get a portait on which you can count the feathers on its head. The highlight of the day must be the light-mantled sooty albatrosses that approached the ship in a group of five. Seeing just one of these gracious birds is a treat - watching a group of them manouver over the waves was breathtaking!