After a misty but calm day on the Drake Passage the sun came out as we approached the South Shetland Islands, Antarctica- a welcome sight after two days as sea. In the distance to the port side we could see Snow Island, and behind, Livingston Island. The sun reflected off their

snow-capped peaks, clearly and beautifully defining them against the deep-blue sky. Outside, near the ship danced Cape and Antarctic Petrels as they followed us to their homes, flying over porpoising Chinstrap Penguins on their way to our destination today of Deception Island. This is the way to be introduced to the Last Continent! You can sense the anticipation amongst those of us who have never visited these parts, and certainly see the building excitement in people's eyes.

We made Deception Island by 1830h and as we entered Whaler's Bay from Neptune's Bellows, a flock of Cape Petrels, which breed on the Deception cliffs, took off from the water in a splendid display. Our landing started at about 1900h and we were thrilled with what Deception had to offer- penguins, both Chinstraps and Gentoos, feeding Cape Petrels, breeding skuas, Kelp Gulls and 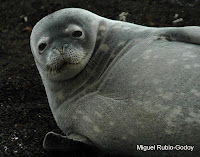 Antarctic Terns, and a lone Weddell Seal. And all of this was to be seen in stunning light as the sun set behind the hills to the west of us. Some of us climbed up the hill behind the aircraft hanger where we viewed the better part of the whole of Whaler's Bay from that vantage point. Other adventurous souls chose to end their landing with a dip in the icy waters (about 0° C/32° F) of the bay. The last Polar Cirkle boat got back to the ship by 2315h. We are all tired but satisfied with a marvelous day!