Early in the morning the brave FRAM lies peacefully at anchor at the very end of the long Sondre Strømfjord.
As a first measure we get unusual visitors: The ground personnel of Air Greenland comes aboard to do the check-in on board of our ship, a very useful service, a floating airport terminal, so to speak. ﻿
﻿

It starts pretty early, so not so many words are spoken while waiting in line. After this is done and the first strong coffee, things are getting better and the spirit of adventure gets the better again. About time, because on the pier there are strange vehicles waiting, big and bulky and obviously strong. These will bring the first group of departing guests on the long and bumpy ride towards the ice cap. Interestingly, this dirt road was constructed a long time ago by the car manufacturer VW, in order to test their SUVs on the ice.

As soon as the first "ice riders" have departed, everyone else leaves the ship in the Polar Cirkel boats, mounts a shuttle bus and is brought to the Science Centre, "downtown" Kangerlussuaq, our bas of operation for the day. Several activities start from here, be it the guided tour through the town including the interesting museum for the younger history of Kangerlussuaq, the former station Blue West 8. Also from here starts the second round of the ice-road drive, as well as the delicious Barbecue in the afternoon by the lake, where Musk ox burger is served and the mosquitoes also have a feast...Somewhat in-between a familiar aircraft appears in the sky and touches down on the large runway. It is the one that brought us here, now coming in with the next group. Words of envy are audible, for they are heading for the adventure, whereas ours is about to end. However, it was a splendid time, with so many impressions and souvenirs, 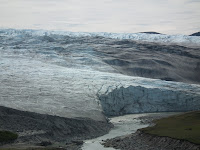 sunshine all over. So there's one thing left to do - come back one day...

In the meantime, a brand-new and curious bunch of arrivals emerge from the airport and gets shuttled down to the Fjord where FRAM is waiting, ready for another adventure

Email ThisBlogThis!Share to TwitterShare to FacebookShare to Pinterest
Photograph(s) by: Mark McDermott; Tessa van Drie; Harald Bang;
Newer Post Older Post Home
Welcome to MV FRAM's Expedition Blog!
MV FRAM is the most modern expedition cruise vessel belonging to the Hurtigruten fleet, roaming polar waters and taking people to remote places where only few go. In order to give you the chance to travel with us, even if only on your computer screen, we have created this blog. Here you can see what we have seen and read what we have done.
And, maybe you will be onboard with us one day!
All About MV FRAM - here
FOLLOW US ON FACEBOOK !